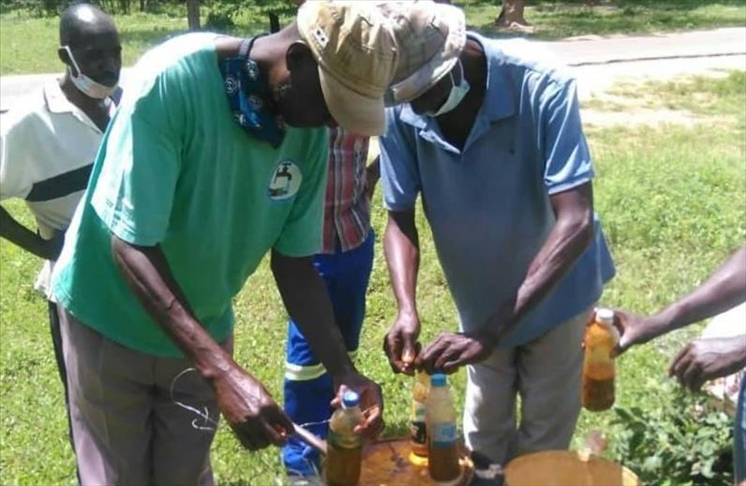 Villagers mixing the concoction to keep away elephants
Spread This News

A NONLETHAL concoction invented by farmers in northern Uganda is helping the people of Zimbabwe keep away rampaging elephants, after years of their attacks on farms during harvest season.

While chili has been used by farmers in Zimbabwe, Tanzania, and Uganda as an elephant repellent since 1997, its unsustainability forced villagers and agriculture experts to explore alternatives.

Maz Robertson, representative of the WildAid in East Africa, said the new concoction, a mixture of chili, garlic, ginger, and cow or elephant dung along with a few other ingredients invented by locals in northern Uganda in 2018, has succeeded in keeping elephants away from the fields.

Robertson said while various chili deterrents had been developed, they proved too costly or the elephants quickly outsmarted them.

“Some of the ingredients need money, hence we have also begun training local villagers to start planting ginger, garlic, and other herbs in their gardens,” she said.

“Hopefully, this will allow us to have year-long supplies,” she added, saying that her group is trying to develop a business model to enable villagers across Africa to have easy access to the pungent elephant repellent.

Speaking to Anadolu Agency, Ndlelende Ncube, the founder and head of awareness group Tikobane Trust, said the concoction was tested in Zimbabwe in villages close to a national park and enjoyed great success.

“The smelly concoction is a combination of lots of herbs, chili, ginger, and eggs as the main ingredients. The strong smell is produced after three weeks of fermentation,” he said.

Ncube said he hoped villages where they use the concoction will see better harvest crops.

Farmers like Flora Mangwana in the village of Dingani in the Dete region, 500 kilometers (310 miles) from the capital Harare, said the concoction is working successfully.

“I’m happy this concoction is working. I’ve seen some changes compared to other years that I’ve lived here,” she said.

According to Mangwana, the idea to use the concoction was approved last year, when a villager guarding his fields died. He was fleeing from elephants at night when ran out onto the street and was hit by a car.

Over many years, elephant attacks in the region have affected the production of maize, which is a diet staple in Zimbabwe.

Farmers in Dete say they are hoping for a better harvest as the concoction saved their crops from trampling elephants.

“We recognize that human-elephant conflict mitigation methods are often too expensive and inaccessible to scale, and are aiming to address this with a business model that allows farmers or villagers to take ownership of the entire supply chain,” said Robertson.

While there is abundant food in the national parks for wildlife, the elephants continue to rampage for a variety of reasons.

“Among these reasons are pull factors such as the need for water, minerals, food, and to mix their gene pools. Also push factors like increased competition for resources between animals and humans, and infrastructure development in elephant habitats,” she explained.