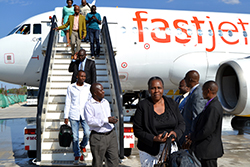 HARARE: Low cost airline Fastjet will next month launch flights between Harare and Johannesburg after being granted permission by aviation authorities from both Zimbabwe and South Africa, the company said on Monday.
AIM listed Fastjet Plc, the parent company of Fastjet Zimbabwe, said it will also launch a Victoria Falls-Johannesburg flight.
The Harare-Johannesburg flight will run daily while its Victoria Falls-Johannesburg route will initially operate three times a week with fares starting from $80 before government taxes.
The Harare-Johannesburg route is an industry cash cow, with Air Zimbabwe, South Africa Airways, British Airways (through Comair) and SA Express running daily flights.
Fastjet Plc chief executive Ed Winter said the airline was establishing itself as a key player in the low cost market.
“There is clearly significant demand for affordable travel between Harare and Johannesburg. As we have seen in other markets, we expect many passengers currently undertaking the journey by bus to switch to flying, taking advantage of Fastjet’s low fares and safe reliable flights,” he said.
Up to 100 buses a day travel between the two cities, a journey which can take as long as 24 hours. Similarly the journey 1,300km road journey from Johannesburg to Victoria Falls can take as long as two days with border crossings.
Fastjet has been operational in Zimbabwe since last year, plying the popular Harare-Tanzania route. It launched the Harare-Victoria Falls route last October.Advertisement