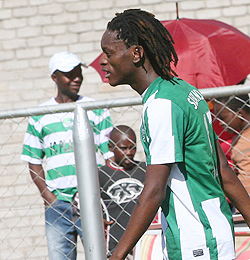 FC PLATINUM went three points clear at the top of the Premier League table on Thursday after edging Chicken Inn at Mandava.
Charles Sibanda gave Platinum a dream start after dancing round the visitors’ goalkeeper Liberty Chirava and finding the target after only three minutes.
But Platinum’s narrow lead would shortly become even shakier as Mitchell Katsvairo was sent off by referee Rugare Kusosa for a forceful lunge which left Brian Juru needing medical attention.
The sending off sparked Mandla Mpofu’s men into life and Tendai Ndoro would have levelled the score for the Bulawayo club but for Petros Mhari’s brilliant fisted block.
But the 10 men of Platinum had the match won shortly after the break as Ali Sadiki curled in a second against the run of play.

Chicken Inn threw the kitchen sink at the hosts but found Mhari unyielding between the sticks.

Mkhokheli Dube then had a good effort brilliantly gathered by Mhari.
Kudakwashe Mahachi’s introduction gave wings to the Chicken run and when he was appended in the box on 90 minutes, Ndoro sent Mhari the wrong way from the spot kick.
Chicken Inn were out of time and Platinum coach Tenant Chilumba reflected on a solid performance by his men.
“We had prepared well and I was looking for maximum points,” said Chilumba. “I want to be on top and when Katsvairo was given the red card, we had to adjust and we won the match through endurance. My players are giving 100 percent concentration and it’s pleasing.”
Platinum sit at the top with 12 points from four matches, but Highlanders can draw level on Saturday when they host Motor Action at Barbourfields in a match to be broadcast on SuperSport.
Teams
FC Platinum: P Mhari, D Veremu, E Moyo, K Moyo, R Muduviwa, T Kamusoko, W Mhango, A Sadiki, M Katsvairo, C Sibanda(D Ngoma 91st), N Maziwisa
Chicken Inn: L Chirava, M Jackson, G Goddard, Z Ngodzo, B Mbiriri, D Phiri,T Ndoro, C Nkomo (C Kamhapa 69th),B Juru (L Mpofu 83rd ),T Chimenya, M DubeAdvertisement