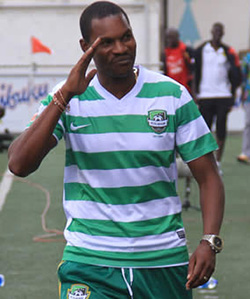 FC PLATINUM have said they stand by coach Norman Mapeza despite suffering their second defeat in four matches after losing 1-3 to Chicken Inn at Mandava Stadium in Zvishavane on Saturday.
The loss saw them drop from seventh to 10th place with four points, nine behind joint leaders Triangle and Dynamos.
Mapeza has been under pressure since the start of the season when his charges drew 2-2 against newly promoted Dongo Sawmill at home before they lost their next match 1-0 to Caps United in Harare.
The following weekend, they were knocked out of the Caf Confederation Cup after losing 5-1 on aggregate before they beat Flame Lily 3-0 at home in their third league match.
But on Saturday, after taking the lead through Donald Ngoma, they took the foot off the pedal and allowed the Bulawayo side to score three times.
Still, club spokesperson Chido Chizondo said they are not pressing any panic buttons.
“The season has just started and we have all the confidence in our coach going forward,” she said.
“You will have noticed that our type of play has changed and there is more purpose in it, so we believe the results will come.”
Platinum though, are not known for taking it easy on coaches.
Since their promotion into the Premier Soccer League in 2011, they have averaged two coaches per season.
Rahman Gumbo took over after the unfortunate death of Benjamin Moyo in 2011, but was fired in 2012 following a string of poor results.
Tendai Chikuni finished off the season before Tennant Chilumba was brought in at the start of 2013, but lasted five months before Lloyd Mutasa took over.
Mutasa could not finish 2014 and was replaced by Mapeza last July, who went on to win the Chibuku Super Cup and the ZNA Charity Shield.
Mapeza gets another chance at redemption this Wednesday when his charges take on an equally limping Caps United in the semi-finals of the Independence Trophy at Mandava.
Caps were hammered 4-0 by Triangle on Sunday for their second loss of the season and will also be looking at reaching Saturday’s final.
The winner will play the victor between Dynamos and ZPC Kariba, who clash in the other semi at Rufaro also on Wednesday.