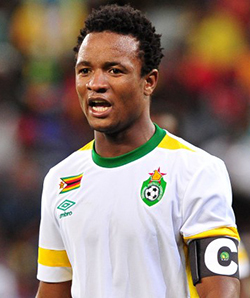 NGEZI Platinum came from behind to level the scores and deny Norman Mapeza’s FC Platinum the chance to go back on table in a league match played at Mandava in Zvishavne on Saturyday.
With log leaders Caps United playing Dynamos in the Harare derby on Sunday, it was a chance for the Zvishavane-based side to go on top of the table, at least for 24 hours.
But Mapeza’s men blew the chance when surrendering a slender 1 -0 lead to a second half strike by defender Partson Jaure for a share of the spoils.
FC Platinum now have 52 points one behind leaders Caps United.
Despite enjoying a lion’s share of ball possession in both halves, the home side failed to turn their dominance into a victory.
FC Platinum took the lead on the half-hour mark through Kelvin Moyo who poked the ball into the net off a rebound from a free-kick by Walter Musoni after he was brought down by Walter Mukanga just outside the box. The score line stood until the break.
The second half resumed and the visitors continued to play second fiddle despite needing a quick equalizer.
However, nine minutes after the hour mark, dividends finally paid for the Tonderai Ndiraya-led Ngezi Platinum after former Dynamos defender Partson Jaure found the back of the net to level the matters.
The home side tried pilling more pressure but the match ended one-all.
In other matches played across the country, relegation candidates Tsholotsho United dismissed the airmen Chapungu United by a 2-1 margin.
Elsewhere, defending champions, Chicken Inn collected yet another set of maximum points at home after dismissing ZPC Kariba 2-0.
Ishmael Lawe and Obadiah Tarumbwa scored for the home side in either half respectively.
And in a bottom of the table clash, Luke Masomere’s Border Strikers succumbed to a 3-0 hiding by Mutare City at Sakubva Stadium.