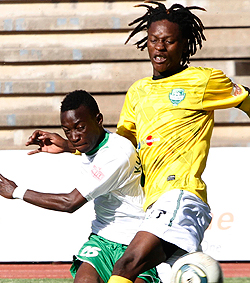 FC Platinum 2-2 CAPS United
CAPS United snatched a valuable point from FC Platinum in a thriller at Mandava on Wednesday as the Premier League title race resumed following a month-long break.
Platinum went ahead through Charles Sibanda before Tapiwa Khumbuyani drew United level in the 39th minute.
A minute later Rahman Kutsanzira headed in United’s second but Donald Ngoma rounded off a memorable first half with an equaliser.
United, now unbeaten in 13 matches, occupy fourth in the league with 32 points while Platinum have 30 and lie sixth.
Leaders Harare City were held to a 0-0 draw by Tripple B at Dulibadzimu in Beitbridge to increase their tally to 38 points ahead of Thursday’s round of matches.
How Mine stunned Chicken Inn with a late penalty from Mernat Mupera to win 2-1 at Barbourfields.
Tendai Ndoro had opened the scoring for Chicken Inn before Timothy January’s equaliser in the 70th minute to set up a frantic finish.
Hwange eased their relegation worries with a stunning 2-0 win over Monomotapa at Rufaro.
On Thursday, Highlanders travel to Black Mambas at Morris Depot and they can close the gap to Harare City to just one point with a win.
Dynamos, third with 32 points, have an easier task against bottom-placed Motor Action at Rufaro on Thursday.