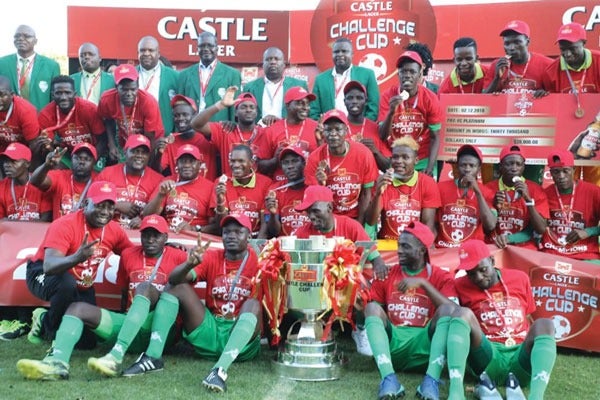 FC Platinum have been crowned the Castle Lager Premier Soccer League for the third successive season after beating CAPS United 1-0 in a thrilling title decider at the National Sports Stadium on Saturday.

The Zvishavane-based side, who needed just a draw to clinch the title, played the entire second half with 10-men after forward Guyve Nsiala was shown a red card just after the halftime whistle for shoving a CAPS’ goalkeepers coach Witness Munkuli.

CAPS United failed to capitalise on the numerical as they wasted several chances after the break before Perfect Chikwende scored the all-important goal in the 60th minute as FC Platinum finished the campaign with 61 points while the Green Machine dropped to third on 59 behind Chicken Inn.

It was sweet victory for FC Platinum coach Lizwe Sweswe, who secured his first PSL title as head coach of the side after taking over the coaching reins from Norman Mapeza.

The seasoned coach, who previously served as Mapeza’s assistant before being elevated to the top post was ecstatic with the victory.

“We showed character and self-belief within the group that saw us fighting until the last minute,” said Sweswe.

“We didn’t want to play for a draw because we would have gone with a defensive approach and lost focus. We came here to attack and it was clear from the start. I’m happy we managed to achieve what we wanted, and the boys can celebrate this. They deserve it,” Sweswe added.

A disappointed CAPS United coach Darlington Dodo conceded that the title was lost before yesterday’s match.

“There are some games which we should have probably done better in the course of the season and get the results that we wanted. But we let those games go, and in the end, we were playing under pressure,” Dodo said.

“We had a very good season, and as much as we wanted to win the league, but probably God had other plans. But these boys has given a lot for the club, for me as well, and the supporters. They played their part, but it’s unfortunate that we lost. We didn’t want to, because we disappointed our supporters,” he added.

FC Platinum looked the hungrier of the two sides right from the onset with Chikwende creating the first real opportunity when his shot went over the bar after 14 minutes.

FC Platinum continued to control the match with Chikwende yet again coming very close when his header from a well taken corner kick by Never Tigere was cleared off the goal line.

The first major talking point of the match occurred after 26 minutes when Never Tigere appeared to strike Valentine Musarurwa on the head in an off the ball incident but the referee only cautioned the midfielder.

CAPS United started growing into the match with Blessing Sarupinda and Soccer Star of the Year Josta Ngodzo beginning to dictate play but FC Platinum were resolute in defence.

The first half however ended in controversy and a scuffle broke out between the CAPS players and officials after the half-time whistle was blown, resulting in Makepekepe’s goalkeeper’s coach Witness Munkuli being shown a red card while FC Platinum’s Nsiala also received his marching orders.

CAPS started the second half positively as they sought to take advantage of the numerical advantage but they barely created any meaningful chances with Newman Sianchali blazing over after 55 minutes.

Despite the numerical disadvantage FC Platinum were always dangerous on the break and soon broke the deadlock as Chikwende connected first time on the hour mark after Rodwell Chinyengetere’s shot had been blocked.

CAPS United tried to come back into the game but FC Platinum managed the game well by slowing down play and employing delaying tactics towards the end.

In the end it was FC Platinum who were celebrating after collecting maximum points while Makepekepe finished the 2019 season in the third position after Chicken Inn beat TelOne to move into second place.

Gweru-based sides Chapungu and TelOne sides joined Hwange and Mushowani Stars to Division One football after being relegated on the final day while Herentals, Bulawayo Chiefs and Yadah survived.