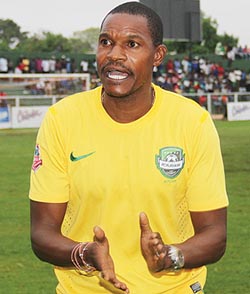 THERE is anxiety nation among football fans ahead of the announcement of the overall 2017 Soccer Star of the Year at a banquet on Friday night.
A panel of football writers, coaches and captains from all the Premier Soccer League clubs met in Harare a week ago where they selected the outstanding football personalities in the just ended season.
Also voted for were the 11 outstanding footballers from the past season, the best goalkeeper and the promising young player of the year.
While the identities of the 11 finest players were revealed, the other categories including the overall Soccer Star of the Year winner, the first and second runner up were kept under wraps and will only be revealed on Friday night.
FC Platinum attacking midfielder Rodwell Chinyengetere is one of the favourites to win the top gong alongside team mate Kelvin Moyo as well as Dynamos skipper Ocean Mushure, Ngezi Platinum midfielder Tichaona Mabvura and Caps United striker Dominic Chungwa.
The coach of the year award is likely to see FC Platinum coach Norman Mapeza and Dynamos gaffer Lloyd Mutasa fighting it out.
Mutasa is credited with building a team from scratch with meagre resources, where he had to conduct trials, yet he still came out with a force that was only pipped on the last day of the season. For that, some believe he is the right man for the award.
However, the fact that Mapeza managed to turn the domestic game on its head to ensure a shift in the balance of power after a lengthy dominance by teams from the big cities could have twisted the vote in his favour.
Mapeza has since 2014, when he took over from Mutasa, been coming close to winning the championship but often failed at the last hurdle, but his tenacity and great ambition eventually paid off this year.Advertisement