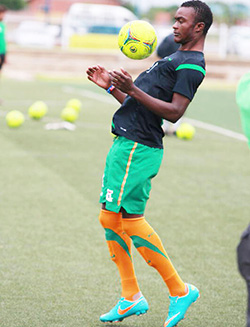 FC PLATINUM have lost a sixth player in the current transfer window after Zambian international defender Aaron Katebe moved to Morocco.
Katebe has joined Maghreb Athletic Tetouan in the Morocan top flight, the club has confirmed.
It is understood the contract is a short term deal as the Zambian defender is on his way to cash-rich Qatar, the 2022 Fifa World Cup hosts.
Katebe, who shone for Zambia in the Cosafa Castle Cup this year, had trials with South African Absa Premiership side Polokwane City after the tournament before opting for Morocco.
He was brought to Platinum by their former Zambian coach Tennant Chilumba, who is now back in his homeland with Power Dynamos.
In addition to Katebe, striker Donald Ngoma and midfielder Thabani Kamusoko have joined Young Africans in Tanzania while Wisdom Mutasa and Walter Musona have moved to FK Seneca in Slovakia.
Striker Obrey Chirwa has moved to Hobro IK in Denmark.
Platinum is the richest and most organised club in the Zimbabwe Premiership and were promoted into the top flight in 2011. They finished second in their debut season.
In their short stint, they have already played in the Caf Champions League and the Confederation, reaching the second round in both competitions.
They have won the Bob Super Cup, the Independence Trophy, the CG Msipa Charity Shield and the Chibuku Super Cup.