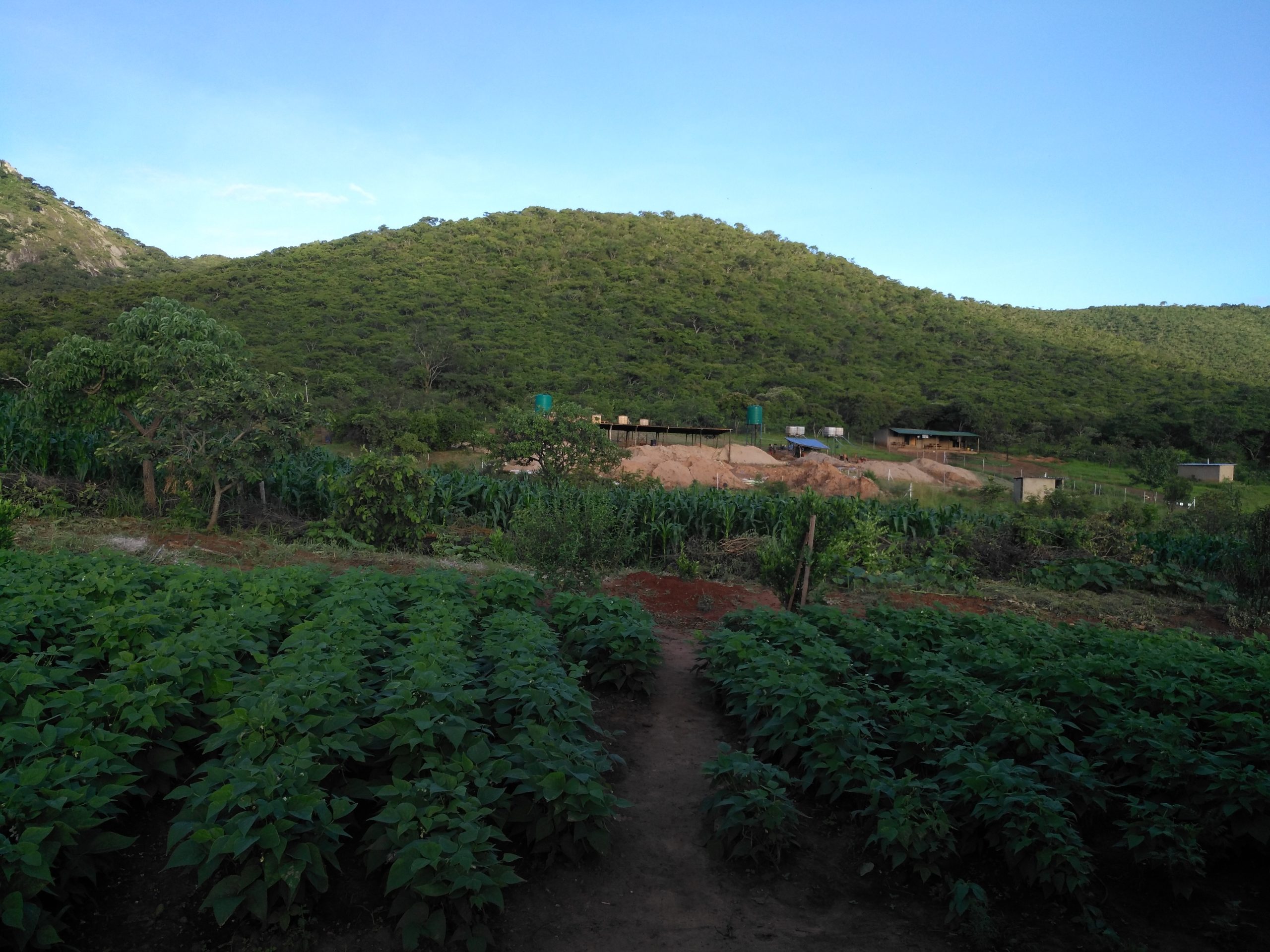 A local farmer, Michael Chekwa, has haplessly watched as cyanide ponds mushroom around his prime farming lands. In this picture, one such mine recently came up and he fears that his crops are contaminated by the slug from its cyanide ponds
Spread This News 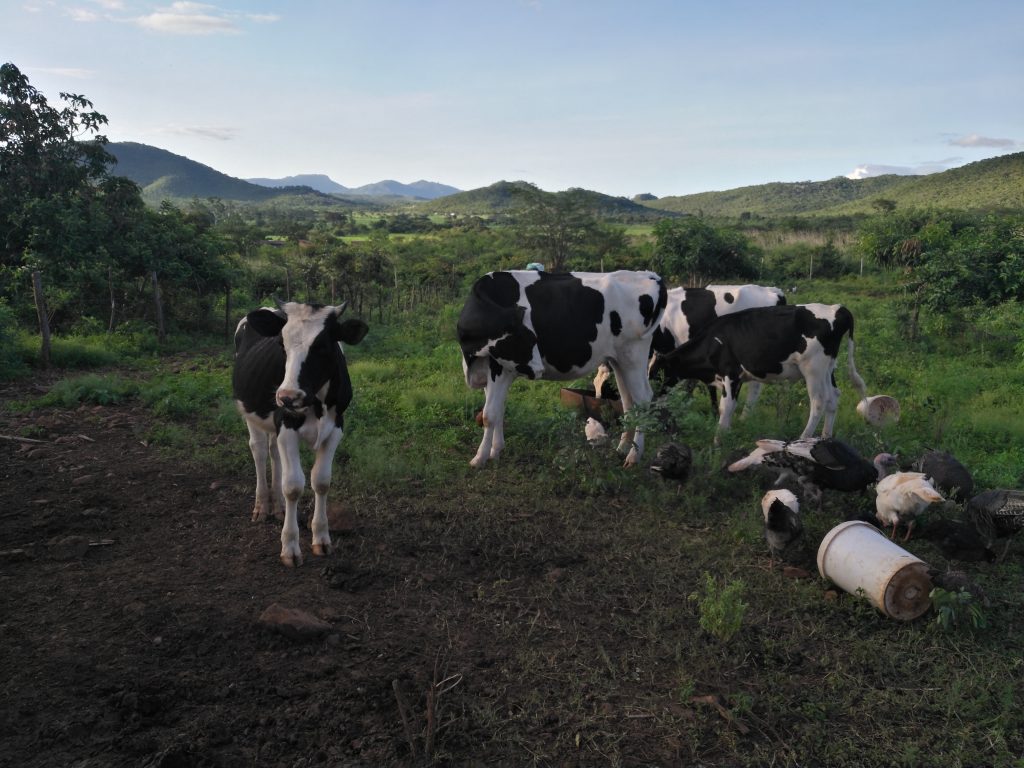 A herd of six dairy cows grazing in the cyanide-laced grasslands.

UNREGULATED gold mills and cyanidation ponds mushrooming in Fairview Estate near Mutare are threatening the viability of a once-thriving farming settlement, with the highly potent chemical used in extracting gold believed to be behind the death of three people and several livestock, the NewZimbabwe.com can report.

The NewZimbabwe.com toured Fairview Estate recently where tensions are running high following the death of one Earnmore Maromo due to suspected cyanide infection.

The 31-year-old father of two died after battling infection for three months.

Mother to the deceased, Betty Chikumbu-Maunze, said her son’s body was abnormally swollen by time of his death.

“My son told me that he was infected by chemicals (cyanide) at work where he worked in cyanide ponds without protective clothing. He also told me that doctors informed him that there were harmful chemicals in his body. So, I know that cyanide killed my son,” said an emotionally charged Maunze.

Though she could not avail medical records, which she said were in possession of her son’s aunt, workers and friends of the deceased corroborated her claims.

Maunze had no kind words for company directors who she said did not even have the courtesy to pay their condolences.

“I have not met any of the directors. I have tried to engage them, but it seems they do not care. But I will not rest until my son gets justice,” she said.

Maunze said she wants GGS Mining Syndicate to cater for her grandchildren’s welfare, shelter and schooling expenses until they are employed.

The elder child is in Grade One while the second born is four years old.

Fairview villagers said the case of Maromo is just a tip of an iceberg.

Patience Sarupinda (44) said her son also works at GGS Mining Syndicate and fears that he might also be infected.

“I’m not at peace after the death of Maromo. I also have a son who works there and fear for the worst. We want authorities to test our water bodies and soils for safety and force the company to take all its workers for medical tests,” said Sarupinda.

She said several cyanide deaths have occurred but have been suppressed.

“This is actually the third death and there is also another (worker) who is ill at the moment,” said Sarupinda, as she appealed for the closure of the cyanidation ponds in the area.

“We don’t have any such case here. We have not recorded any deaths from cyanide. This person (Maromo) was ill for some time, yet cyanide kills instantly,” Mupambare said before demanding medical records that proves that Maromo died from cyanide infection.

Mponda said the community was trying to use the media to tarnish the image of the company.

However, when Sithole met the NewZimbabwe.com recently, he did not bring the paperwork as promised by his co-directors the previous day.

He alleged that Maromo’s death might have been linked to promiscuity as “he was in the habit of sleeping around with people’s wives”.

Sithole said there is nothing amiss about their use of chemicals since local farmers also use pesticides and herbicides in their fields.

“In terms of consultations, we engaged Chief Saungweme and the school, where we donated 40 000 bricks. The school gave us permission for our trucks to pass through their (playing) grounds. We have offered the community employment and assisted in various ways,” said Sithole, indicating that their clashes began when they started building cyanidation ponds.

However, Fairview’s challenge is not limited to GGS Mining Syndicate as there are several small-scale artisanal mining groups operating up to 10 cyanidation ponds, allegedly behind the alarming death of livestock.

NewZimbabwe.com gathered that Fairview, located in Ward 23 approximately 20 kilometres east of Mutare, has been a thriving agricultural settlement established during the controversial land reform program. The farming area is rich in maize and wheat production, and also favourable to goat, beef and dairy cattle production after Dairy Board established a milk collection point.

It was established and declared a farming area under a permit allocated on November 6, 2001 and renewed in 2015 by former Agriculture minister Douglas Mombeshora.

Records from the ministry of Agriculture – dated July 6, 2015 – indicate that Fairview was allocated to a total of 58 farming households with a current population of 250 villagers.

Each household was issued with between 1ha to 4,16ha of residential and arable land, and 16,8ha of communal grazing area.

“Pastures are the most affected while other claims are spilling into residential areas,” he said.

At law, projects are required to obtain an EIA certificate first before any commencement of any works as prescribed by Section 97 of the Environmental Management Act of 2007. It is during this process that the community is consulted whether they approve or decline, any project earmarked for their community.

Said Mangwana; “But here there’s no consultation and consent.

“Surely, how can school kids operate in such an environment? Not to mention the noise from the grinding mills, which make it hard for kids to concentrate with studies,” he said.

The NewZimbabwe.com observed that all the cyanidation ponds are located along the surrounding mountains while all farming activities are conducted in the valley. Technically, it becomes easier for any spillage to contaminate agricultural activities as the slug will spill down the slopes.

“I don’t know if we are still safe. In fact, I think our future is disastrous. Our government should have us in mind,” said Mangwana.

According to the Centre for Disease Control and Prevention (CDC) caustic soda, mercury and cyanide mainly used by the syndicates, are harmful.

Caustic soda is harmful depending on amount and duration of exposure.

Cyanide, a highly poisonous chemical, is deadly when consumed through breathing air, drinking water, eating food or touching soil contaminated by the chemical.

Exposure to mercury also has toxic effects on the nervous, digestive and immune systems, lungs, kidneys, eyes, skin and can cause cancer.

A1 farmer, Amos Charinge said the crisis in Fairview is a national problem as its value chain affect communities and businesses that depend on their produce.

“This is everyone’s problem because the toxic substances that are contaminating our pastures will, in turn affect ,the cattle which you buy from us,” he said.

“So I think you can see how big this problem is. All the commercial farmers who owned the land before us. They knew there was gold but they chose farming because they knew it is for the future. But right now we are killing our own land for a few grams.”

A case in point is where Grain Marketing Board (GMB) in Mutare reportedly turned down tonnages of wheat from commercial farmer at a neighbouring estate after it was irrigated by contaminated water.

Mangwana said the challenges cannot be resolved by mines ministry officials at provincial level as they are complicit to the crisis.

“We have received intelligence that some mines ministry officials are receiving bribes while others are in partnership with the syndicates. So when our complaints land on their desk, they bury them,” he said.

“We do have an issue that was raised and attended to by our inspectors last month. They are now working on the reports. We will give feedback to the farmers once the reports are ready,” he said.

Quizzed on whether there are any registered mining syndicates in the settlement, Mugandani said “I don’t know off hand, I need the report to guide me on the situation there.”

An officer with EMA, Simbarashe Makonese, was yet to confirm whether GGS Mining Syndicate and other gold plants in Fairview were issued with certificates on time of going to print.

However, some villagers are who want the cyanidation ponds closed said delays by authorities will see the farmer-miner conflict turn violent.

Cyanide have become a crisis in the mining industry after Centre for Research and Development (CRD) issued a report late last year that there were 129 hammer mills and six cyanidation sites illegally processing gold ore and contaminating water bodies in in Penhalonga.

CRD said there is need to expedite the amendment the Mines and Mineral Act which empowers mining to supersede agriculture in order to resolve cases of farmer-miner conflict.