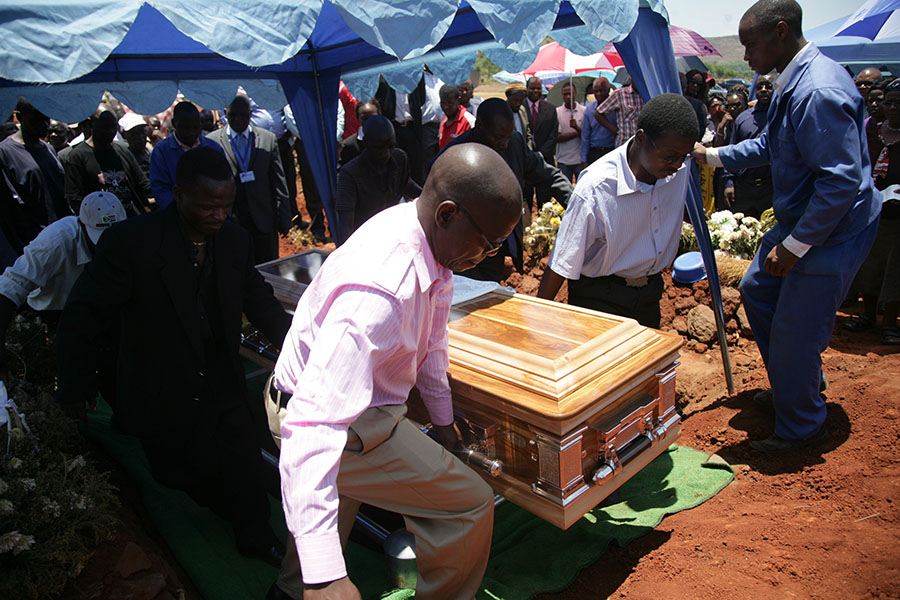 PASTOR Tonderai Hlahla nurses “a small grudge, sort of,” he says. ‘”My former congregants are passing on 7,600 miles overseas in England and get buried there. I, their mentor, I only get to watch their funerals on WhatsApp video; it feels so discriminating.”

Zimbabwe, with its estimated 16 million citizens, is the perfect emblem of Africa’s fast-growing diaspora. Africa now has around 30 million citizens living abroad. Zimbabwe’s diaspora, to be specific, now numbers 49,000 in England, 30,000 to 50,000 in the United States, and reportedly up to 2 million in South Africa, although that figure is disputed.

Thus, at home and abroad, immigration and the new trend of digital e-funerals are splitting pastors’ emotions and sense of church loyalty.

“It’s a key part of our Zimbabwean church and traditional culture that if our loved one dies, for example in Texas, in the U.S., their spirit is not properly rested unless their remains are flown to Zimbabwe for burial,” said sociologist Naume Moyo in Harare, the capital city of Zimbabwe.

Across Africa, Moyo said, fierce societal beliefs hold that even if one is a CEO in Paris, on death that person’s body ought to be flown back to be buried at “home” in Africa. It doesn’t matter whether one has spent the biggest chunk of their life in Europe or the U.S., bought property there or given birth to second-generation immigrants who never have set foot in Africa.

But WhatsApp, Facebook Live, and Skype-enabled funerals are ripping apart that mortality glue that binds together Zimbabwe’s diaspora and the “home” pastors they leave behind upon exiting Zimbabwe. The number of Zimbabwean diaspora families choosing to get buried abroad in New York or London or Canada is increasing exponentially, said Tose Gava, a funeral insurance specialist with DiasporaInsurance.com, an insurance corporation that caters to members of the Zimbabwe diaspora in England.

Many Zimbabwe immigrants are preferring to be buried in their adopted countries, with their last journeys ministered by their new American or European pastors, and only allowing their former church pastors back home in Zimbabwe to watch the e-funerals in real-time, online from smartphones.

“It feels uncomfortable to watch an ex-congregant of mine, people I mentored, seeing their last journey on Facebook Live, and their new Canadian pastor getting all the praise,” Pastor Hlahla explained.

“What really rubs me the wrong way is that my children are getting their remains cremated up there in Canada. I totally oppose cremation as an African church faith leader,’” he added.

Hlahla is a senior pastor with All Nations Church, an independent evangelical Africanist church with congregations stretching from South Africa to Zimbabwe. By “my children,” he refers to members of his congregation who grew under his tutelage in Zimbabwe before migrating to Canada, the U.S. or Europe.

“It frustrates me too,” said Pastor Rishon Muganga of Zion Christian Church, one of Zimbabwe’s biggest anti-colonial Africanist independent churches.

“In 2020, six of my children (congregants) migrated to Toronto to work after getting jobs as accountants and engineers. Now, Canadian diaspora pastors have taken them and made them join the Presbyterians over there.”

Pastor Muganga says his ultimate frustrations centers mainly on the six funerals of his Europe-based ex-congregants who succumbed to COVID-19 in 2020. He has attended their services online via WhatsApp video and Google Meet from Zimbabwe.

“One, is my late child whom I literally raised in the ZCC Church here in Zimbabwe before they left for England to become a dentist,” he said. “On arrival in England, they switched to Anglican. I attended their funeral via WhatsApp video, and the presiding British pastor never for once mentioned my name for raising that child.”

Another more practical source of grievance about the diaspora, though, is the loss of money and gifts lavished on pastors by skilled and highly educated members of Zimbabwe’s diaspora.

Pastors left behind in Zimbabwe feel disappointed that they’re losing tithes, flock and money to churches in London or New York. In May, Baptist News Global reported that in African countries like Zimbabwe and South Africa, some pastors of mega-Africanist churches command lavish lifestyles, with their wellbeing catered for by both adulating worshippers, whom they colloquially refer to as their “children.”

Onismo Sibanda at his new Anglican church in Canada.

‘This is the big source of Zimbabwe pastor’s anger that if a congregant who is a chartered accountant, whom I mentored spiritually, and who would buy me gas and grocery gifts monthly, immigrates for a higher paying job in Australia, then their new Australia pastor will unjustly benefit from my ‘child,’” explained Moyo, the sociologist.

But the complaint also touches on the role of technology in bereavement in the African context, Moyo added. “Is a Facebook Live funeral and digital rites a real funeral in the African belief of a funeral and what happens to the departed spirit?”

However, for the Zimbabwe diasporans who now choose to be laid to rest abroad, online e-funerals are cheaper and more accessible due to no visa restrictions.

“My loyalty is not hostage to my pastor whom I left back home in Zimbabwe. I’ve got the right to worship in a new church and get laid to rest by a new minister,” said Onismo Sibanda, an electrician who was a Baptist in Zimbabwe and became Anglican on arrival in Canada in 2018. Like many ex-pats, Sibanda said he wishes to be laid to rest in Canada, not Zimbabwe, by his new church when his mortal life is over.

Audrey Simango is a Zimbabwe freelance reporter. Her work appears in New Arab, Newsweek; The Africa Report, and The New Internationalist.