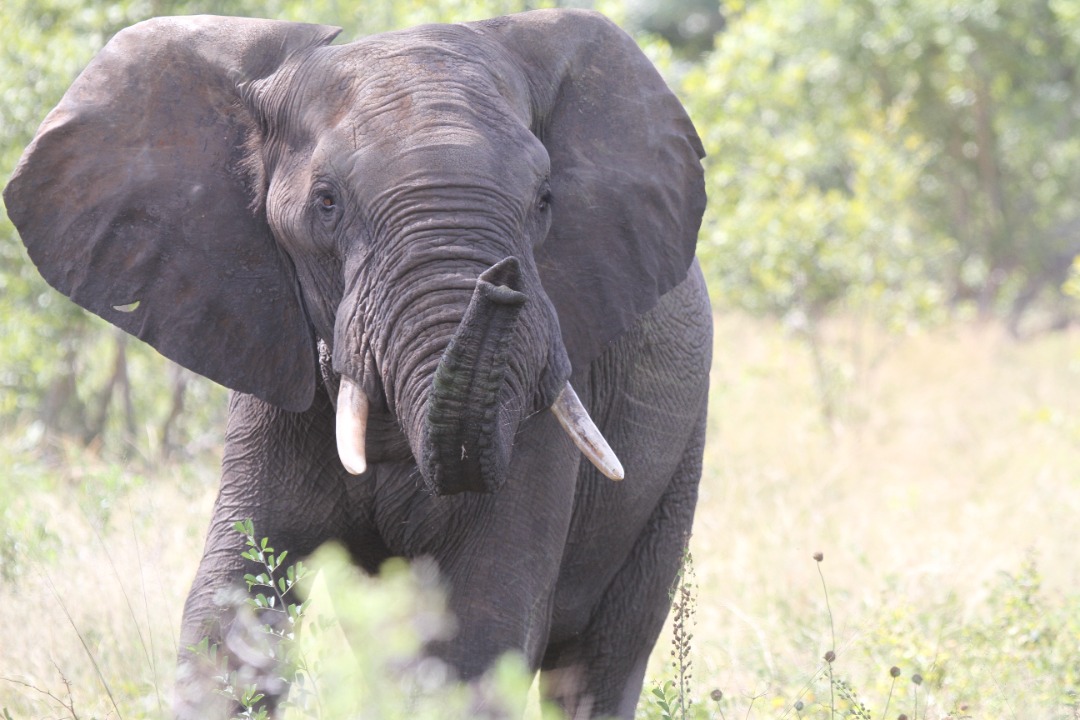 THE powerful Toyota Landcruiser thunders as it hurtles along a rugged road tearing through the dense forest.

The driver, a Mr Chibaya, suddenly applies brakes by a sharp curve, bringing the occupants, lost in drink and conversation, on an involuntary, syncronised nod.

A female occupant lets out a pale shriek, prompting laughs from the rest of the car; just before Chibaya could quieten everyone down with finger-across-the mouth-gesture followed instantly by a warning so quiet, yet so emphatic: “sssshhh, it’s an elephant.”

The world’s largest land mammal, at that very moment, emerged from the foliage in rampaging mode, taking its position right in front of the vehicle and flapping its giant ears as if to say: “this is my home. I rule these jungles and I don’t tolerate trespassers. Dare me once and I will show you what I am made of.” 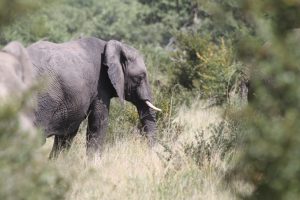 The standoff persisted for exactly 48 seconds, which felt like an hour.

Behold, an elephant calf appeared from the same thicket, crossing the road at a terrific speed and raced down to join a massive herd foraging on the other side, never appearing to be bothered by the drama.

The mother let out one last trumpet, stamped its right forefoot on the ground and glided through the thicket with utmost grandeur, befitting a rendition of forgotten comedian, Ba Tencen’s ungandidini (what harm can you cause me) punchline.

Only after the jumbo had joined its fellow behemoths rummaging on the other end did Mr Chibaya – who has trudged these ancient wilds for a lifetime – restart the car engine, and on we went.

But not for long. Three score kilos further, another halt; this time occasioned by a massive elephant herd crossing the road at its own desired pace, unaggressive, as if we did not exist.

Tinashe Farawo, that guy who has traded pen and paper to focus on fighting for the rights of animals, took the opportunity to display his belatedly begotten knowledge of wildlife: “We appear in their eyes like flies. They can easily squash us.”

One keen journalist, in his ill-advised youthful exuberance, thought he could dare these ‘devils’, jumping out of the car at the tail-end of the convoy to photograph the trooping.

One elephant was not amused at all. It trumpeted and went on a mock charge which sent the boy scampering for his life back into the car.

We proceeded along the elephant dung-littered road and arrived at the far-flung Makona Camp, almost 100km from the Hwange Main Camp.

Makona Camp, on the Western outskirts of the 14 000 square kilometre wildlife sanctuary, is being modernised courtesy of a five-year partnership between the International Fund for Animal Welfare (Ifaw) and Zimparks in which the former pledged US$5 million.

Already, US$2 million of that has been used to, among other things, the park’s road network, making navigability much easier. As Farawo put it, rangers used to spend six hours on the Main Camp-Makona Road, implying response to poaching and problem animals was extremely lethargic.

Also, the giant’s park’s watering holes have been desilted and widened and new ones have been established. In addition to that, the Zimparks vehicle workshop has been sufficiently retooled, the veterinary clinic reopened, and the vital canine section revitalized.

What this has done is to revolutionaries Hwange National Park into a virtual wildlife paradise in which all species now thrive, more so the elephants whose population have over the past few years boomed.

“When you visit Hwange, you are 100% assured to see the elephant and would be unlucky not to see the giraffe, the zebra and impala,” Farawo said.

And he had a strong backer in Chibaya, who said as we departed Makona back to the Main Camp: “We are going to use the best game viewing route where you will see many animals.”

For about 50 or so kilometres, all we came across were intermittent elephant herds and the usual birds; no sign of the vast herds promised by Chibaya.

We were close to labelling him a liar when an explosion of wildlife suddenly appeared before us as we negotiated a certain curve, the vast plains opening up like a bride welcoming the groom.

It all started with a strong aroma of sage filling the air as we travelled along the wetland.

We crossed the tracks of a honey badger, and in the distance, heard the yelping of a pack of hyenas which Farawo claimed signaled they were in pursuit of prey, an impala, perhaps. But we were not blessed with what could have been the ultimate spectacle since it played out far beyond the reach of our eyesight.

But the disappointment of that soon faded, giving wat to a memorable spectacle. Out in the plains, an assortment of animals gathered in their numbers, each specie never bothering bout the other.

This was closest anybody can be to an atypical animal paradise. A massive elephant herd heralded this paradise with its unmistakable presence, constituting of the dominant matriarchs, the large bulls, the teenagers, and even small energetic calves.

But this time, they competed for attention with another imposing creature, the giraffe. The iconic mammals came in a sizable herd too, some so tall we appeared before them like gnomes. 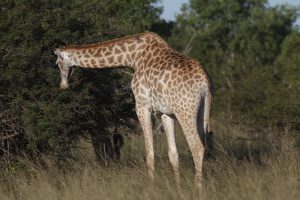 They were fused with the most decorative animal there is, the zebra, young and old. The little ones occasionally exploded in short, mazed darts, never straying too far from their ever-alert mothers.

The ostrich, too – three of them – strutted their stuff with utmost majesty, the impala always displaying their hereditary nervousness on the bushy edges of the swamp.

We left these regal plains thinking we had had the best of what the jungle could ever have offered, little did we know.

About six or so kilometres from there, we had to stop again, this time in awe of the most spectacular herbivores, the buffalo. It was a massive herd keeping a healthy distance from the road, but enough for us to get the perfect view.

Buffalo soldiers made a ring around the females and the calves, to protect them from any predator.

“This is the most dangerous animal, the only one which does not need to be provoked to attack a human being. It attacks on sight,” that fella who cannot miss an opportunity to display his belatedly begotten knowledge of wildlife, pronounced.

I am sure I was, this time, the sole audience of this, with everyone else consumed in the admiration of nature’s best.

We drove on, but not for too long.

At a watering hole, a very rare spectacle ensued.

Farawo had earlier indicated how difficult it was to ever come across the reclusive lion.

But there not so far off, two lionesses walked towards the watering hole, displaying the trademark self-importance that comes along with being the king of the jungle.

They made for the watering hole, only to find the uncompromising residents of it in full guard. Three large crocodiles were taking full advantage of the final, pre-dusk moments to sunbath themselves. 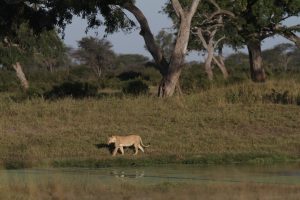 The lioness carefully walked towards the watering hole, only to find vicious crocodiles on guard

They never moved an inch, as if unaware of who it was that sought to quench the day’s thirst, whose bellies were evidently full of meat.

The lionesses, famed for being super patient, simply took positions on an anthill overlooking the watering hole.

“They won’t depart until they have their drink,” Farawo said, this time to a keener audience.

We left them there, convinced the best was behind us. But these forests are ever so generous.

As we careered towards the Main Camp, we noticed a certain creature sleeping right in the middle of the road, at first wondering what kind it was. Never at all appearing to be bothered by the approaching vehicles.

It was the hyena, which was to steal the whole show for itself, to be remembered by us more than the rest, even the king of the jungle.

It remain right there starring at us, never moving an inch. Our driver stopped the vehicle two metres off and we scrambled to photograph it. Behold, from the coppice, another hyena emerged, younger and much more daring.

It approached the vehicles as if intending to inspect and determine which beast they were and see if a meal could be realised of them.

You could never have asked for more. For five or so minutes, this little hyena kept us captivated, until the older and bigger one decided they had given us enough of it and trudged off into the forest.

The younger one followed suit, leaving us to proceed back to the Main Camp, where on arrival we were greeted by a massive herd of impala running across the premises at full speed. 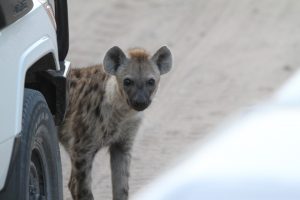 That night was punctuated by the hyenas’ periodic loud barking noises that sound like cackling laughter, and a territorial male lion’s roar proceeding from a distance away.

At the end of it all, Farawo had this to say: “Our conservation efforts are really paying off. We haven’t heard a single major poaching incident for nearly five years and the result has been this massive boom.”

Indeed, Hwange National Park has become a virtual animal paradise worth of a weekend excursion for those that love nature.