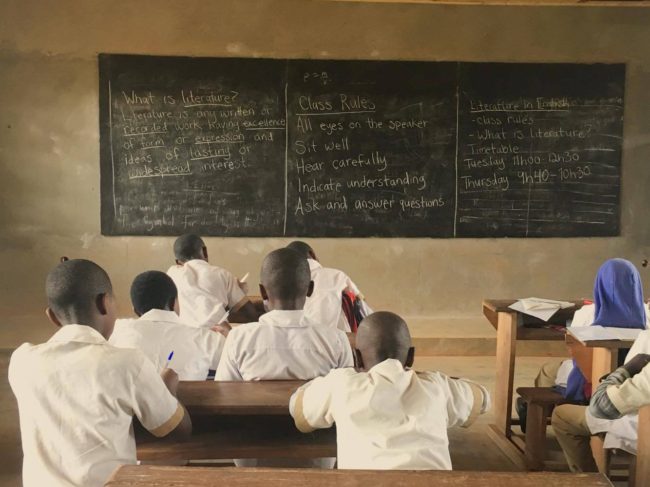 Chinese has been called the language of “extreme” obscurity. The idea of learning the language for many seems alien. But for Herbert Mushangwe, whose Chinese name is Li Kaiming, learning Chinese is an investment for the future.

Mushangwe, a professor at the University of Zimbabwe Confucius Institute (UZCI), is the first Zimbabwean to obtain a doctorate degree in the Chinese language.

He said his passion for Chinese came from both “positive and negative factors.” The communication challenges he faced during his early days in China, and the fear of going back without solid language skills prompted him to roll up his sleeves.

He first made up his mind to study the language after learning of China’s exponential economic growth over the past three decades.

By immersing himself in a Chinese environment and befriending as many Chinese friends as possible, he quickly mastered the language.

After acquiring his Master’s Degree in Chinese Linguistics and Applied Linguistics at Tianjin Normal University in northern China, Mushangwe came back to Zimbabwe and became the first-ever local Chinese language lecturer at the UZCI in 2011.

In 2012, Mushangwe went back to China where he enrolled for a doctorate degree in Chinese Linguistics and Applied Linguistics at Hebei University. He came back to Zimbabwe in 2015, since when he has devoted his career to teaching Chinese and researching second language acquisition.

His passion for teaching coupled with his love for Chinese turned the UZCI into a nursery for language learning and bolstered enrollment numbers.

The access to materials that learners can relate to, or materials that take into account the learners’ environment is key when learning a foreign language, said Mushangwe.

The portable electronic dictionaries some Japanese students were using to learn Chinese he saw while he was studying in China in 2017 made him realize the importance of developing a dictionary for Zimbabweans.

He then started drafting a Shona-Chinese dictionary, which later became the first Shona-Chinese/Chinese-Shona dictionary ever published. Shona is Zimbabwe’s most spoken language.

Mushangwe said the access to locally produced materials is key to learning a language and achieving high proficiency.

His latest handbook, “Introduction to Chinese Characters from a Zimbabwean Perspective,” makes it easier for Zimbabwean students to learn China’s written form.

“Your own language is the basis of understanding a foreign language. That’s why we need to develop our local resources which better explains the target language, its terms, grammar patterns and so forth,” he said.

Mushangwe has co-authored several books including the first English-Shona-Chinese phrasebook published by the University of Zimbabwe in 2019.

He has also published countless research papers in reputable local and international journals, and has been playing a significant role in developing locally produced materials for learning Chinese.

As the economic strength of China becomes more apparent, the number of students learning Chinese in Zimbabwe has grown by leaps and bounds.

“For the young people who want to grow in any career, learning Chinese helps expanding professions,” he said.

He believes students with high levels of fluency in Chinese will be in demand in the job market in the years to come.

Mushangwe has inspired hundreds of students, many of whom have managed to get scholarships to study in China.

As Africa-China ties continue to blossom under the auspices of the Forum on China-Africa Cooperation and the Belt and Road Initiative, strengthening intercultural communication between the two sides has become imperative.

For him, the language is key to enhancing mutual understanding and can be a good motivator in uniting the two cultures.

Owing to the influx of Chinese investments in the country, it has become imperative for young Zimbabweans to learn Chinese.

As more Chinese businesses flock to Africa, Mushangwe said increased production is closely related to the effectiveness of communication.