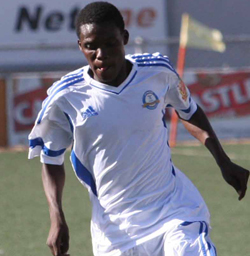 DYNAMOS midfielder Denver Mukamba was on Thursday turned away by Coach Lloyd Mutasa after he pitched up at training for his misdemeanours which included failure to report for duty.
Mukamba was told by team manager Richard Chihoro not to bother coming for training again.
“This is now an executive issue because as the technical team we are done with Mukamba. We said we no longer have him in our plans and we didn’t even know that he was here,” said Mutasa.
The Dynamos gaffer had asked the administration to terminate the former Soccer Star of the Year’s contract, following a string of off-the-field shenanigans by the midfielder.
Mukamba was top of a long list of players that Mutasa wanted to ship out, which also include goalkeeper Ashley Reyners, Simbarashe Gorogodyo, Carlos Rusere, Thembinkosi Simango, Musa Madhiri, King Nasama, Takunda Sadiki and Jimmy Konono.
He was sitting on a final warning when Mutasa told the executive that he was fed up with the player, but the club developed cold feet, fearing the possible costs that could arise from terminating his contract. Mukamba still has one year left on his contract.
But Mutasa is adamant that he will not entertain the player who missed several matches last season without his consent.
Mukamba has seen his career deteriorate since returning to DeMbare from an unsuccessful stint with Bidvest Wits two years ago.
Reports suggest he was part of a group of players who were taking cough mixtures for intoxication and while a number of squad members including Roderick Mutuma were axed as a consequence, Mukamba was forgiven several times.
But he refused to shed off the bad boy tag, with more reports of gross indiscipline and bad behaviour emerging last season which saw his form on the field taking a dip.
Together with Lincoln Zvasiya, they went AWOL in the final weeks of the campaign as Dynamos chased the league title which they eventually lost to FC Platinum by two points. And again, he got away with a warning while Zvasiya was booted out.
But he still decided not to report for training for the remaining matches, a decision which appeared to have stretched Mutasa’s patience to the limit.Advertisement