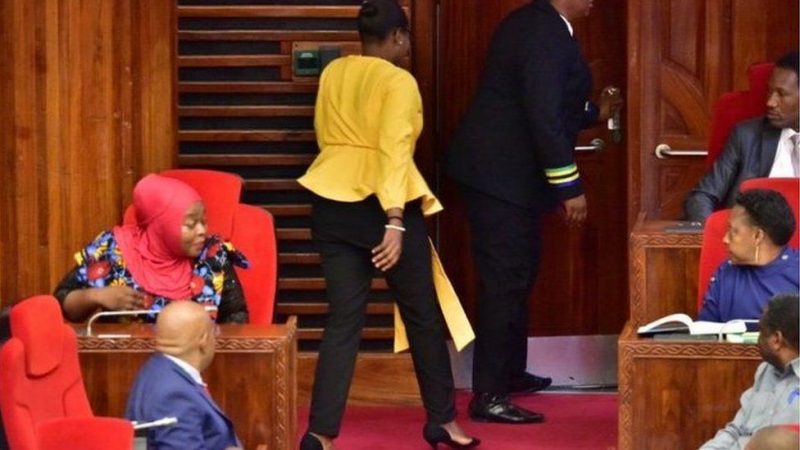 FEMALE MPs in Tanzania have called for an apology to an MP who was ordered to leave parliament because of her trousers.

A male MP said the way some women dressed invited ridicule to parliament.

“Mr Speaker, an example there is my sister seated on my right with a yellow shirt. Look at the trousers she has worn, Mr Speaker!” Hussein Amar said in parliament on Tuesday.

The Speaker then ordered the MP, Condester Sichwale, to leave.

“Go dress up well, and then join us back later,” said the Speaker Job Ndugai.

He added that this was not the first complaint he had received about female Member of Parliaments’ attire, and told chamber orderlies to deny entry to anyone who was inappropriately dressed.

While Mr Amar did not elaborate on what he found wrong with Ms Sichwale’s outfit, he quoted the parliamentary rules which allow women to wear trousers but stipulate that clothes should not be tight-fitting. He was unavailable to answer the BBC’s request for comment.

A group led by MPs Jacqueline Ngonyani and Stella Manyanya insist that the move was unfair and that there was nothing wrong with Ms Sichwale’s clothes.

The incident has also attracted comments on social media from around the world, with some saying it was another example of men policing how women dress.