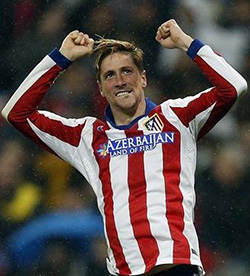 FERNANDO Torres stole the show with a dramatic double as Atletico Madrid secured a battling 2-2 draw at Real Madrid that dumped the holders out of the Copa del Rey 4-2 on aggregate.
Back at his boyhood club after seven years of mixed fortunes in England and Italy, Torres stunned the Bernabeu with a goal in the first minute of each half of the last 16, second leg. It was the first time he has scored against Real at their giant arena in the Spanish capital.
Sergio Ramos and Cristiano Ronaldo twice headed the home side level but Atletico, who won last week’s last-16 first leg at the Calderon 2-0, comfortably held out to set up a quarter-final clash against Barcelona.
“The fact that we scored so early meant we could play the game we wanted,” Torres, who was substituted just before the hour, said in an interview with Spanish television broadcaster Canal Plus.
“We never felt the tie was in danger and we weren’t under stress,” added the former Liverpool and Chelsea forward.
“I was smiling when I came off because of the win and for scoring my first two goals (since I returned to Spain) and also for doing it in a stadium where I hadn’t managed it before.”
Premier League – Paper Round
Juve and Roma weigh up summer move for Falcao: Serie A giants Juventus and Roma are ready to rescue Radamel Falcao from his Manchester United nightmare. That’s according to the Daily Star, who report that “it is understood that Juventus and Roma have contacted Falcao’s representatives to discuss the situation and a possible summer deal to lure him away from Monaco for good.”
United given extra £150m to sign marquee players: Staying on the subject of United, it appears that manager Louis van Gaal will be given even more money in an attempt to entice the cream of the crop to Old Trafford. The Mirror reports that Borussia Dortmund defender Mats Hummels tops the wanted list, closely followed by Roma midfielder Kevin Strootman and that “United also want a right-back, with Nathaniel Clyne of Southampton believed to be their preferred choice ahead of Everton’s Seamus Coleman.”
Van Dijk welcomes Gunners link: “Celtic defender Virgil van Dijk has welcomed reports linking him with a move to Arsenal this month after describing the transfer stories as ‘great’,” reports METRO. Van Dijk has been linked with a move away from Celtic Park in recent days with possible suitors including Arsenal, Everton and Sunderland. According to the London daily, Celtic are believed to want £10 million for the defender and quote the player, via De Telegraaf, as saying “If there’s a nice club from England, we have to talk. I want to develop myself as a player, that’s for sure.”Advertisement