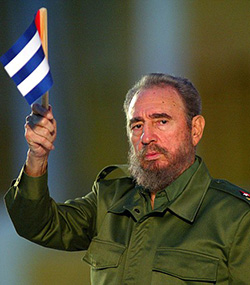 AFRICA should be grateful for Fidel Castro’s immense contribution in material and human resources that contributed to the “liberation” of the continent from colonialism. But in being thankful the continent should not make a deliberate decision of ignoring the sordid truth that Fidel was a brutal and ruthless dictator. He seemed to have a relentless passion to prosper human kind all over the world with the exception of “his” people. Cubans suffered immensely from his brand of democracy.
Africa must count itself lucky that his impracticable Marxist-Leninist ideology completely failed to get traction. If it had obtained takers, we would have been economically and politically more miserable. Fidel’s colleagues in Africa chose instead the path of being corrupt, thieving despots and economically clueless dictators. In the end, we just became  two sides of the same coin. Our leaders celebrate his life for the simple reason that they are like him.
I opine that people venerate others who have achieved the state of being which they themselves wish to achieve. The respect for Fidel by some African leaders is because they would do to a free people exactly what Fidel Castro did to the people of Cuba. Those who shower boundless praise and celebrate his life (as a tyrant) should never be allowed in positions of power and authority in a free society.
Cubans are a poor lot who have to do with food rationing and coupons. Unlike “independent” Africa which depends on the support and benevolence of the much loathed former colonisers to feed its citizens, Fidel showed bravado by feigning self-sufficiency (a euphemism for poverty).
Nearly two million Cuba’s are economic and political refugees in the Americas. Those who fled Cuba in such huge numbers can’t surely be counter-revolutionary but are a reality check of failed economic policies. The induced economic refugee situation is also prevalent in Africa. This explains the admiration for Fidel by our leaders. Ordinary people should not venerate this dictator – it’s the job of those leaders who are like him. Citizens cannot feed on useless ideologies.
Fidel was brutal. He slaughtered thousands of Cubans for no reason except political difference. He was a despot of unimaginable proportions who curtailed freedom of expression, privacy, association, assembly, movement and due process of the law. His democracy credentials are not worth celebrating. He was also renowned for curtailing and harassing religious leaders and leity. He murdered gay people on the pretext that they were a deviation incompatible with the revolution. A leader who fails to celebrate diversity is a danger to societies that celebrate pluralism.Advertisement

Those who are celebrating his life and mourning his death should spare a moment to remember the families of his victims. The life of a murderer must not be celebrated; rather his demise. The life of Fidel should be loathed for his complicity in hiring firing squads that murdered Cubans as a method of punishing them for disloyalty and to intimidate potential opposition.
Castro and his buddy Che tied dissidents to trees and summarily executed them to stay in power in the belief that the “end justifies the means”. So many African leaders seem to have copied his repugnant and devious model of democracy. It’s a death wish to oppose these near-God Africa leaders.
Present day African despots also emulate Fidel’s self-installation as a demi God of the Cuban Communist Party. They admire his model of one centre of power in the party and government decision making matrix. Near-worshipping of leaders and centralising power should never be celebrated – it’s the anti-climax of the democracy we yearn for. Castro’s model even more distasteful as he thought Cuba was owned by the Castro family. He anointed his own brother as successor. Nations should be for all the people who live in it them, not a family clique.
It’s a half truth that Fidel delivered remarkable standards in health and education. Statistics show that in 1957 Cuba had a higher doctor-patient ratio than Europe, South America and the USA. He therefore, simply maintained the Fulgencio Batista healthcare system momentum rather than him being its innovator.
The same applies to education; numbers don’t lie. Let’s assume for the sake of argument that Fidel Castro provided free, best in class healthcare for all 11.4 million citizens of Cuba. What was the cost? If the cost was to become a slave on an island with an official monthly salary of 494 Cuban pesos a month ($18.64 USD), was it worth it?
I tend to believe the willing media took these healthcare claims at face value as peddled by his regime. During my last visit to Havana in 2008 the pharmacies seemed empty. Empty pharmacies and archaic medical equipment is not exactly a model for good healthcare. Healthcare goes beyond just the availability of medical staff.
Beyond brutality, Fidel scored nothing in terms of his ability to deliver economic success. His discredited Marxist-Leninist model which subsidized education, transport, healthcare and food whilst averse to free enterprise was dependent on the diaspora for sustenance. Deploying food rationing and coupons is not exactly delivering a remarkable standard of living. It’s dehumanising to have a central government that determines what should be consumed in your house.
A country whose economy was bigger and richer than Japan in 1957 is now ranked a paltry 52nd in the world whilst Japan is 2nd. Like Trump said “Fidel was terrible with real estate. He never did anything with all that beachfront property”. Cuban buildings are so dilapidated. The roads and the cars in Cuba are as old as Fidel. That should not count for progress.
Unfortunately, African leaders were captivated by his flaming rhetoric including marathon speeches at international forums. His defiance to America and capitalism unfortunately did not deliver a remarkable standard of living to his people. The same is true for the delivery of freedom and liberty. His discredited and irrelevant ideology was nothing but a mask to hide his brutality.
The lessons of Cuba are staring us right in the face. It’s never the right way to lead. We in Africa are really unfortunate to have leaders who are admired for their bravado but are loathed by progressive citizens for corruption, thieving, brutality and despotic tendencies. We seem poorer than before we were liberated.
Brian Sedze is the Chairman of Africa Innovation Hub and President of Free Enterprise Initiative. He can be contacted on brian.sedze@gmail.com