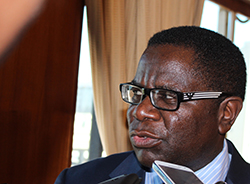 FIDELITY Life Assurance shareholders on Tuesday approved a resolution to acquire 81 percent of Langford Estate from agro-industrial group, CFI Holdings.
The acquisition is a land-for-debt swap deal which Fidelity says will increase its balance sheet over five-fold and become the cornerstone of its future growth.
The approval at an extraordinary general meeting means Fidelity will assume CFI’s $18 million debt on restructured terms after shareholders of the agro-industrial conglomerate approved the sale at its EGM held last Friday.
Fidelity plans to use Langford’s 834 hectares of undeveloped urban land located in Harare South to expand its Southview Park high density residential housing scheme.
“This project is going to generate a bottom line of more than $200 million which will strengthen our balance sheet. We should be able to underwrite and undertake more risk on the insurance side,” managing director Simon Chapereka told The Source.
“In terms of our balance sheet, it is moving immediately from $86 million to 108 million. By the time we finish the project, the balance sheet will be in the region of $500 million and on that we can underwrite even bigger insurance risks.”
CFI owes FBC Bank, Agribank, CBZ, the Infrastructure Development Bank of Zimbabwe, NMB and Standard Chartered a combined $18 million, which will be assumed by Fidelity under the terms of the deal.
Chapereka told shareholders at the EGM that Fidelity said it had already deposited $2 million with a local bank pending approval while the balance will be paid over seven years at 10 percent interest per annum on the balance after a two year grace period.
Langford will be Fidelity’s third residential property foray after Manresa Fidelity Life Park and Southview and Chapereka said the ventures were key to growing its insurance business.
“Our property investments are profitable, but we are not forgetting our core business, which is insurance but the developments give us the ability to match our long-term liabilities and assets. In any case, there are not so many viable investments outside of property,” said Chapereka.
“Manresa Fidelity Life Park was $7 million. In terms of Southview Park, by the time we finish that will be worth about a $100 million and Langford will be about $300 million.”Advertisement

Manresa, a medium density project has 317 stands which were sold out except for 20 which the group retained for internal use.
At Southview, the group expects to complete servicing of 2,100 stands under the second phase of the project by November this year for a total of 5,300 stands. About 700 stands under the project remain unsold.
Langford will have 11,624 residential stands and will generate up to 250 percent return on investment.
“Langford was an opportunity we could not miss. The land was bought for $18 million, and we are going to add about $200 million to the bottom line from that,” said Chapereka.
In terms of the mix, Chapereka said the insurance business and property were at 50:50 but with the addition of Langford, it will become 40:60 with more value coming from property investments.
“It is worth noting that we have been able to undertake these projects because of the income from the insurance side of business,” said Chapereka.