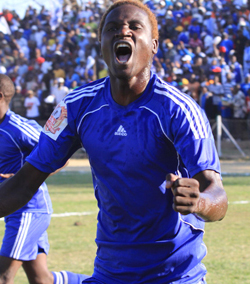 FIFA has ruled that Rodreck Mutuma can rejoin Dynamos after Zifa wrote to the world soccer governing body seeking clarification over his transfer.
The PSL had initially told Dynamos, where Mutuma has been training, that he could not register with the league because he did not qualify as a free agent.
The league management then sought clarification from the country’s soccer governing body which forwarded the case to FIFA.
Local authorities wanted to know whether Mutuma could be registered after the March 25 Fifa cut- off date for transfers following his release by South African club Bloemfontein Celtic.
Although Zifa were not ready to divulge the response from FIFA, saying they needed to inform the PSL first, the player’s clearance from South African Football Association (SAFA) and Bloemfontein Celtic Mutuma shows he is a free agent.
The development means Mutuma can be registered with the PSL and be available for selection ahead of Dynamos’ trip to Shabanie.
An International Transfer Certificate issued by South African Football Association (SAFA) on April 30 this year, states that: “We certify that in accordance with the provision of the FIFA regulations on the status and transfer of players, player Rodreck Mutuma formerly a member of Bloemfontein Celtic, having dully fulfilled his obligations both towards his former club and our association, is therefore free to pursue sports activities with another association affiliated to Fifa.”
The player was deregistered by SAFA on April 30 and his ITC was delivered the same day. His former club, Bloemfontein Celtic, also issued him a clearance certificate on April 9.
Mutuma has been playing in South Africa on the books of Bloemfontein Celtic before returning to Harare this season to join champions Dynamos.
He has been training with the champions since his return Dynamos have had a sluggish start to their defence of the championship and have suffered three defeats in the campaign including two losses on the bounce against Chapungu and Buffaloes.
Dynamos coach Kalisto Pasuwa has been hoping Mutuma would be registered on time to boost his attack which is struggling in front of goal. Dynamos face Shabanie this weekend in a must win tie.
WEEKEND FIXTURES
SATURDAY: Caps United v Black Rhinos (National Sports Stadium SS9), Chicken Inn v How Mine (Luveve), Chiredzi FC v Chapungu (Chishamiso)Advertisement