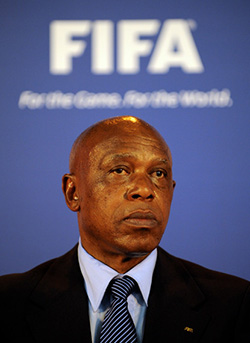 A KEY figure in South Africa’s football World Cup bid has broken ranks with the government to suggest there might be some truth to a claim that a $10m bribe was paid to secure the 2010 tournament.
Tokyo Sexwale told the BBC the US allegations were “worrisome”.
The government says it paid $10m to accounts controlled by then Fifa vice-president Jack Warner to support football development in the Caribbean.
An official said the money, transferred by Fifa, was given without conditions.
But Sexwale – a former Robben Island prisoner, government minister, and a member of both the World Cup bid team and local organising committee – has now openly questioned the credibility of the claim that the money was a “donation”.
“Where are the documents, where are the invoices, where are the budgets, where are the projects on the ground?” asked Sexwale.
“If they are not there, you are going to leave the FBI [US Federal Bureau of Investigation] interpretation intact,” he said.
“I was part of the feeling at the time – it’s a good thing, this altruism (towards the African diaspora in the Caribbean).
“The question is going to be: ‘What was done to make sure that your good intentions – you as the giver – have been realised?'”
Although Sexwale appears to be one of only a handful of South Africans who could, theoretically, fit the FBI’s description of its unnamed alleged co-conspirators #15 and #16, the ANC stalwart insisted he had no knowledge of, or involvement in, any bribery.
He declined to point fingers, and insisted that he and others in South Africa had no reason at the time to doubt Warner’s intentions.
The opposition Democratic Alliance has demanded that other officials involved in the World Cup bid should account to parliament, but ANC MPs recently voted to prevent that from happening.
“For me it’s almost bewildering and unbelievable that it would be a gift without conditions. Ten million dollars is not pocket money,” said Solly Malatsi, the DA’s shadow sports minister.
The sports ministry did not respond over the weekend to phone and email requests for a response to Sexwale’s comments.
Previously, when asked by the BBC whether it had been reckless of the South African government to give $10m “without conditions” to Warner, Sports Minister Fikile Mbalula said: “No, it was not reckless.Advertisement