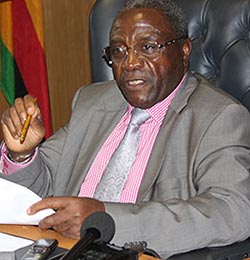 HEAD of Fifa member associations department Primo Corvaro, has said kicking out former Zifa president Cuthbert Dube will not end Zimbabwe’s seemingly unending problems.
Corvaro officiated at the extraordinary general meeting on Saturday, when Dube’s mandate was revoked by an overwhelming 51 of the 54 councilors who attended the meeting.
Corvaro also revealed that Fifa will not be sending financial assistance to Zifa until audited financial statements are produced.
“I am not supporting him (Cuthbert Dube) but Zimbabwe’s problems are far from over. The next Zifa president will have a big job to do especially settling Zifa’s debts,” Corvaro said.
“Settling the debts would be important if you are top move forward. Yes you got rid of Dube but the problems you are facing will not go away. Zimbabwe will not be receiving money from Fifa until audited accounts are produced. Over some years, Fifa has not been receiving the audited statements from Zifa on how they use the money sent to them.”
Making the presentation of the financial statements more complex was the board member finance’s failure to access Zifa’s financial books.
A Harare-based audit firm is believed hired by Zifa to be asking for US$30 000 before it releases financial results of the job they did.Advertisement