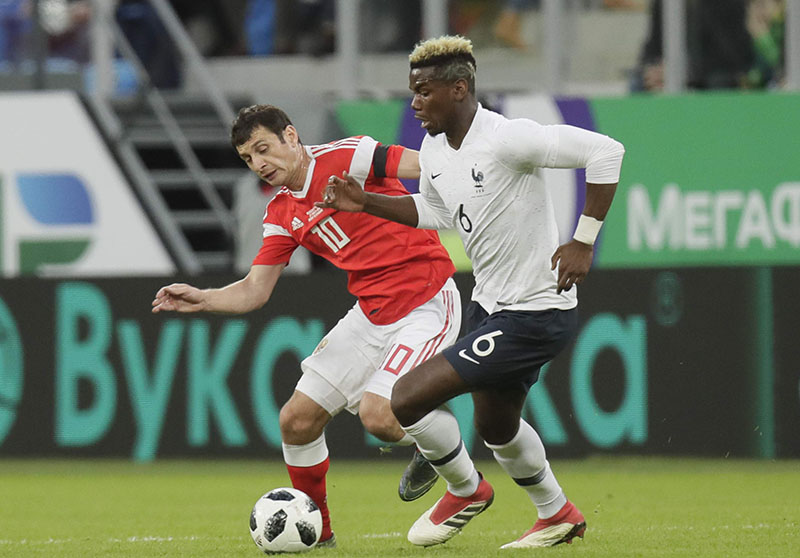 FIFA has opened disciplinary proceedings against World Cup hosts Russia over monkey chants heard during a friendly international against France, a spokesman told AFP on Tuesday.

“We have no further comment at this stage,” the FIFA spokesman told AFP.

The Russian Football Union (RFU) said it was ready to cooperate with FIFA’s probe.

“We launched our own internal investigation the day after the match,” RFU anti-discrimination officer Alexander Baranov said.

“All international matches are played under the jurisdiction of FIFA. We opened it to understand what happened for ourselves. We have sent inquiries to the interior department.”

Baranov added that the RFU was “in dialogue with FIFA. We are ready to send them our findings — there is no problem there”.

Russian football chiefs are under pressure with just two months to go before the start of the World Cup on June 14 as the domestic game has been once again tarnished by incidents of racism and hooliganism.

“These people should not be allowed into stadiums. They should not be giving the world reason to think there is racism in our country,” added Alexei Smertin, head of the RFU’s anti-discrimination department.

The RFU’s initial response was sceptical — claiming they had heard nothing — but the country’s governing body then did launch its own investigation.

The Russian parliament’s deputy speaker, Igor Lebedev, blasted inaction in the country over racism and called on “fans to stop this”.

“This is not just a problem with our fans’ perception of African American and black players,” he had said.

“The problem is elsewhere: none of this bad behaviour will stop until we start punishing it.”

Lebedev insisted that such incidents taking place during the World Cup would “embarrass the country”.

But Deputy Prime Mister Vitaly Mutko played down the incident, saying that monkey chants heard at the game “do not mean that this was some sort of organised act of racism”.

“There might be elements of it,” said Mutko, who has temporarily stepped down from his role as RFU president.

“Around 50,000 people turn up for games and there could be some provocations,” Mutko added.

Black players have complained in the past of being subjected to racial abuse in Russian football. Brazilian great Roberto Carlos, who played for Russian club Anzhi Makhachkala for one season, walked off the pitch in 2011 after a banana was thrown his way during a match.

Another Brazilian, Hulk, who played for Zenit St Petersburg for four years, complained in 2015 that “nobody is paying attention to this problem”.