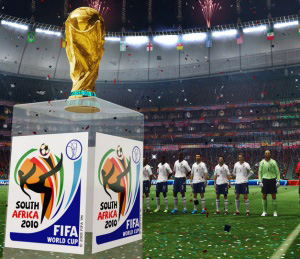 FIFA have confirmed their belief that South Africa’s $10-million payment to Concacaf was a bribe to its then-president Jack Warner to secure 2010 World Cup bid votes.
FIFA have on Wednesday demanded that “tens of millions of dollars diverted from the football community illegally through bribery, kickbacks and corrupt schemes carried out by the defendants” in the U.S. indictment of corrupt former officials be paid back to the governing body.
A total of 39 individuals and two companies are facing charges in the U.S. relating to the worldwide football corruption scandal, including Warner.
The South African government has insisted that everything was above board with the payment, as outlined in this statement from minister of sport Fikile Mbalula insisting it was not a bribe.
But now, in a legal document sent to U.S. authorities, FIFA have plainly stated their belief that the $10-million intended for the African Diaspora in the Carribbean was a bribe in disguise.
An excerpt from FIFA’s Restitution Request, available on FIFA.com, reads as follows:
‘It is now apparent that multiple members of FIFA’s Executive Committee abused their positions and sold their votes on multiple occasions. As the Grand Jury alleged in the Superseding Indictment in United States v. Hawit, 15-cr-252 (E.D.N.Y. Nov. 25, 2015), Dkt. No.102, Defendant Jack Warner, together with his co-conspirators Charles Blazer (who has admitted his crimes and pleaded guilty), Defendant Warner’s son Daryan Warner, and other co-conspirators not named in the Superseding Indictment, engineered a $10 million payoff in exchange for Executive Committee votes regarding where the 2010 FIFA World CupTM would be hosted.
‘The scheme built off Defendant Warner’s corrupt vote in 1992 for Morocco to host the 1998 FIFA World CupTM, when he accepted a bribe from the Moroccan bid committee in exchange for his vote for Morocco. Twelve years later, the Morocco bid committee once again offered Defendant Warner and Charles Blazer (who now also had a vote as an Executive Committee member) a bribe, this time of $1 million.
‘But Defendant Warner and his family had already established close ties to South Africa during South Africa’s failed bid to host the 2006 FIFA World CupTM. For example, Daryan Warner had organized a series of friendly matches among CONCACAF teams to be played in South Africa, relying on his father’s network of contacts there. Daryan Warner had also served as his father’s bagman, traveling to a hotel in Paris, France to receive a briefcase with $10,000 in cash from a high-ranking South African bid committee official and immediately returning to Trinidad and Tobago to give it to Defendant Warner.Advertisement

‘Ultimately, given Defendant Warner’s strong illicit ties to the South African bid committee, the South Africans offered a more attractive bribe of $10 million in exchange for Warner’s, Blazer’s, and a third Executive Committee member’s votes. Warner and his co-conspirators lied to FIFA about the nature of the payment, disguising it as support for the benefit of the “African Diaspora” in the Caribbean region, when in reality it was a bribe. They disguised and funneled the bribe money through the financial accounts of FIFA, member associations, and the 2010 FIFA World CupTM local organizing committee.
‘At the time of the scheme, Warner was a member of the FIFA Executive Committee, a FIFA vice president, and the president of both CONCACAF and the Caribbean Football Union (“CFU”), which had 31 member associations in its ranks. Blazer was also a member of FIFA’s Executive Committee, at times a member of FIFA’s marketing and television committees, and the general secretary of CONCACAF. They breached the fundamental duties they owed to FIFA, CFU, and CONCACAF and stole $10 million.’