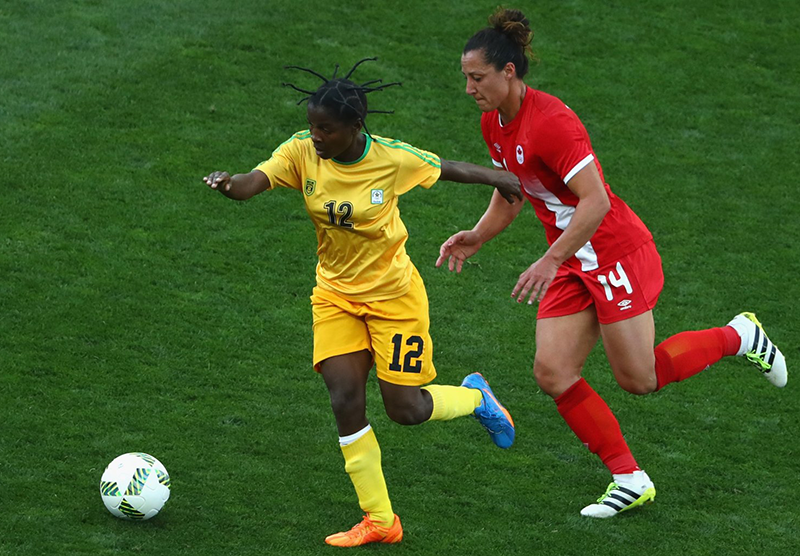 The talented Zimbabwean football player Marjory Nyaumwe is no stranger to carrying her country’s hopes on her shoulders as part of the women’s national team, the “Mighty Warriors.”

Unfortunately, the global governing body FIFA’s ban on Zimbabwe from international matches last year has had a devastating effect on her and her fellow players, leaving them in a precarious financial situation with no end in sight.

The meagre resources available to Marjory mean she can hardly afford to make the journey to training sessions, denying her the chance to compete at the highest level and realize her potential.

“We get allowances when we play international games which can last us for several months. But when we are not playing like this it gets tough,” center-forward Nyaumwe, 35, said.

“The money I had in my savings from the last match we played against South Africa in 2021 is running out. I cannot even afford to fill the tank of my car.”

Female footballers have been worst hit, said players and experts, as they have worse pay and terms than male players and rely more on fees from international fixtures.

A women’s national team player, who declined to be named, said the international match ban meant she could no longer afford to financially support her mother.

“Before the ban, we could get some allowances (for matches). It was little but helpful. Right now I am struggling,” she said.

She, like other players, also worries the FIFA ban means she is missing out on career opportunities.

“We get exposure when we are playing for the national team,” she said.

“I was hoping this year I’d be picked by some foreign clubs, but when I’m grounded like this, they won’t even notice me.”

Top-level football offers the hope of a well-paid international career for female players in Zimbabwe, a country battling to recover from a decades-long economic crisis and where women have relatively few good job opportunities.

Players on the women’s national team are only paid when they compete and do not have contracts to lay out how much they will get per match, according to a player who spoke on condition of anonymity and a former member of the Zimbabwe Football Association (ZIFA) who also asked not to be named.

Xolisani Gwesela, the chief operations officer at ZIFA, said all players for both men’s and women’s national teams have contracts. He said information on pay is confidential and declined to comment further.

Women’s teams and leagues generally lack sponsors and local matches are typically not broadcast on television, the former ZIFA member added, denying clubs of income from broadcasting rights in a male-dominated sport.

Many top female players see international contests as a way to showcase their skills hoping to win contracts in other countries where pay is higher, she said.

FIFA banned ZIFA in February after the government dissolved ZIFA’s board over allegations of corruption, misadministration and sexual harassment of female match officials.

The government has since reinstated some of ZIFA’s board, but FIFA has said it will not lift the ban until the government fully reverses the suspensions.

The row could deter other women and girls from taking up the sport, said Blessing Malinganiza, a sports reporter at the tabloid newspaper H-Metro.

“They shouldn’t let our game die, they should consider the opportunity these young girls are missing,” she said.

While the impasse between the government and FIFA continues, Nyaumwe worries the clock is ticking on her career, with many professional players retiring by their late 30s.

“Morale is down. I feel let down, though my coach encourages me to keep on practicing,” she said.

“My biggest fear is that by the time the ban will be lifted, my age will limit my performance.”