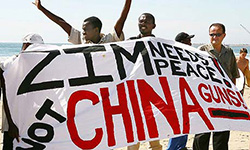 A FORMER Parliament of Germany State Secretary, Dr Uschi Eid, has urged Zimbabwe’s civil society to challenge the expropriation of resources and unfair labour practices by Chinese companies.
The German politician is a member of the Green Party which lost last year’s parliamentary elections and is out of the federal government.
Eid, who is also a member of the board of the Germany Africa Foundation, was responding to questions from Zimbabwean journalists who were on a fact-finding mission to the European country.
The journalists raised concerns about the “invasion” by the Chinese who have set up businesses in Zimbabwe.
Chinese companies operating in Zimbabwe are accused of clandestinely signing unfair business deals with President Robert Mugabe’s administration.
They are also accused of evading tax and engaging in unfair labour practices while operating in Zimbabwe.
The Chinese have set up businesses in all sectors of the country’s economy including the retail and indigenous food industry.
They are also accused of importing their own labour from their home country.
“This is an issue which should be dealt with by your trade unions and civil society because you cannot import foreign (Chinese) labour in a country where there are thousands of unemployed people,” Eid said.
“You need to have a strong civil society that challenges government over such serious national matters. This is the responsibility of citizens and no one else to strongly oppose that.”
The Zimbabwe Congress of Trade Unions has in the past complained about unfair labour practices by Chinese companies in the country.
A ZCTU official recently told NewZimbabwe.com that some Chinese businessmen had “boasted” that they were immune to prosecution because of their strong links with the ruling Zanu PF party.Advertisement