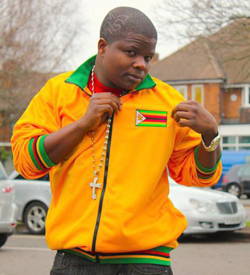 EFFORTS to fight piracy are a “lost battle”, according to singer Nox Guni who is urging record companies in Zimbabwe to move on with technology.
Several artists have found their music on sale at street corners and downtown markets – even before their albums were officially released.
Once released, albums are immediately ripped and sold on the cheap on the streets – netting the vendors thousands of dollars and nothing for the artists.
But ‘Ndinonyara’ star Nox says while government efforts to crack down on piracy – including regular police raids on street vendors – are welcome, they will not crush the illegal trade in copied music.
“We can never win the battle against piracy as long as technology is available, it’s a lost battle,” Nox told New Zimbabwe.com during an interview in London.
“The best we can do is to devise methods that can make us benefit from the piracy itself. CD sales are at an all time low worldwide and it’s mainly because of piracy, which is fuelled by technology.
“What is certain is that as long as music is available for free download on other online platforms, we they are simply wasting time moaning about pirates. Artists need to evacuate from their comfort zone and raise their creative game.”
Nox, who is based in South Africa, says he has long discounted CD sales as a revenue stream.
He explained: “Very few people are buying CDs. Just ask yourself, when was the last time you bought an original CD of any Zimbabwean artist…or any artist at all? Yet you have all the hot music from Zimbabwe and abroad, that is what is called piracy.
“What I do is let people get the music for free and the higher the popularity, the more opportunities I get for shows and corporate endorsements. That is where the money is, not in CD sales.
“My money comes from the tours and the concerts that I do. On top of that I own a record label as another avenue for income. We also have a clothing line that brings in income.
“Royalties (from CD sales and radio play) come once or twice a year, and it’s not something you can really bank on. For example, the whole of last year, I netted about US$3,000 from royalties and that cannot really sustain an artist.”
Nox was speaking at the end of his joint tour of the UK with Thomas Mapfumo. He expressed a desire to use a live band for all future UK gigs instead of backtracks, but he fears promoters could be scared off by the increased costs.Advertisement

Meanwhile, Nox has revealed that he will release a new album in August. The 15-track album will be called ‘8th Wonder’, and will feature the singles Usazvinyepere, Tarisai Mukati and Kwangu Kuchengera.
NOX: USAZVINYEPERE