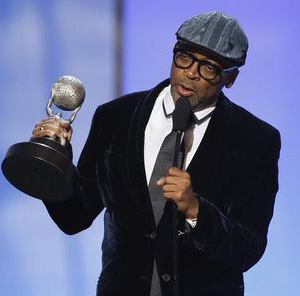 MOVIE director Spike Lee, known for films that deal frankly with racial issues, appeared in Chicago on Thursday to defend his planned movie about the city, after its reported title, “Chiraq,” was criticized by local politicians.
Speaking at a South Side church and surrounded by African-American mothers carrying pictures of children killed in street violence, Lee said artists hold up a mirror to society and are not afraid to tell the truth.
“We have to stop the madness,” Lee said. “This is insane.”
He said people who know nothing about it have been expressing opinions about the film. Lee referred to the movie’s “so-called title,” but did not say if “Chiraq” would be the title and did not take questions.
“Chiraq” is street slang that compares the nation’s third largest city to the war zones of the Middle East. Chicago Mayor Rahm Emanuel, U.S. Senator Dick Durbin, and local alderman Anthony Beale have expressed concern over the title, with Beale calling it “insulting.”
Chicago recorded 407 murders in 2014, far ahead of the 328 recorded in the larger city of New York. Chicago has long fought a reputation for violence, enhanced by the mythology surrounding Prohibition-era gangster Al Capone.
Lee said he was not concerned about Chicago politics or tourism.
“This is not about Chicago losing business,” Lee said.
Referring to the grieving mothers around him, Lee said, “No one wants to be a member of this club right here.” Lee cited news reports that 14 people had been shot in the city the day before, with three killed.
Appearing with Lee was Chicago actor John Cusack, who is involved in the movie along with Samuel L. Jackson, according to the IMDb entertainment website.
Also present was Father Michael Pfleger, pastor of St. Sabina Catholic Church, who is known for activism against gun violence.
“We’re painting a reality that’s difficult and hard,” Pfleger said.
Behind the speaker’s podium was a garden marked with nearly 500 small red flags, placed on Mother’s Day by women who lost children to violence.
Pastor Brenda Mitchell told reporters that in 2005 she sent one son to fight in Iraq but had to call him home a week later for his brother’s funeral.
“It’s an irony that I would send a son to settle someone else’s freedom, and lose my other son in a free country,” Mitchell said.Advertisement