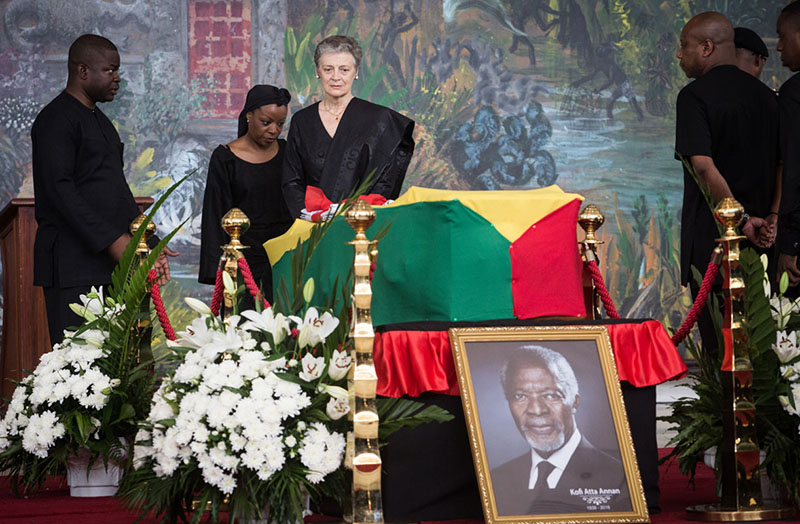 World dignitaries laid to rest former UN secretary general Kofi Annan in his native Ghana on Thursday, with calls to keep alive the legacy of a “stubborn optimist” to create a better, more peaceful world.

His widow Nane Maria led hundreds of mourners, including world leaders past and present, traditional rulers and global royalty, and called her husband an “extraordinary” person who had a “joy of life”.

“My love, you are now back home where you started your long journey. But may your wisdom and compassion continue to guide us, wherever we are,” she told his funeral in the capital, Accra.

His son, Kojo, said his father had dedicated his life to the ideals of unity, equality, love, peace and respect.

“The greatest tribute we could ever pay is to follow his example,” he added to conclude a three-hour ceremony of tributes, prayer and song.

Annan led the UN from 1997 to 2006 and was the first from sub-Saharan Africa to do so. He died on August 18 aged 80 at his home in Switzerland after a short illness.

Thousands of ordinary Ghanaians this week paid their final respects as his coffin lay in state during three days of national mourning.

Ghana’s President Nana Akufo-Addo called him “one of the truly iconic figures of modern times”.

Many ordinary Ghanaians described him as a father-figure and a source of national pride, while his brother, Kobina, told the congregation that he was not just a leader and statesman.

“We lost a brother, a husband, a father, a grandfather and an uncle, a man of deep conviction who was as committed to instilling the values of fairness, integrity, kindness and service in each of us as he was to advocating for peace and human rights around the world,” he said.

“Stubborn optimist that he was, he would want us all to look forward with hope and keep striving to create a freer, fairer and more peaceful world.”

Current UN Secretary General Antonio Guterres praised his close friend as an “exceptional global leader” who was dignified, courageous and a man of “integrity, dynamism and dedication”.

“As we face the headwinds of our troubled and turbulent times, let us always be inspired by the legacy of Kofi Annan,” he said, adding: “Our world needs it more than ever.”

Annan, who was originally from Kumasi, the capital of the Ashanti region in southern Ghana, devoted four decades of his working life to the UN, and was known for bringing quiet charisma to the role.

He was widely credited for raising the world body’s profile in global politics during his two terms in office, facing challenges including wars in Afghanistan and Iraq.

Annan was awarded the Nobel Peace Prize in 2001, as the world was reeling from the September 11 terror attacks in the United States, jointly with the UN “for their work for a better organised and more peaceful world”.

Annan, a proud African, whom Nelson Mandela called “my leader”, left the post as one of the most popular — and recognisable — UN chiefs in history, and was considered a “diplomatic rock star” in international circles.

President Akufo-Addo said Annan “brought considerable renown to our country by this position and by his conduct and comportment in the global arena”.

“The outpouring of tributes from the world over is an accurate measure of the man, a man who gave his life to making peace where there was conflict, to defending the voiceless who were powerless, to promoting virtue where there was evil,” he added.

Annan kept up his diplomatic work after leaving office, taking mediation roles in Kenya and Syria, and more recently heading an advisory commission in Myanmar on the crisis in Rakhine state.

He acted as a negotiator between the government and the opposition in Kenya after post-election violence at the end of 2007, leading to the formation of the Grand Coalition government.

As well as Guterres, the funeral was attended by representatives of the African Union, the West African bloc ECOWAS, and presidents from across Africa and beyond.

Royalty included Princess Beatrix, the former queen of the Netherlands, and her daughter-in-law Princess Mabel, who were close friends.