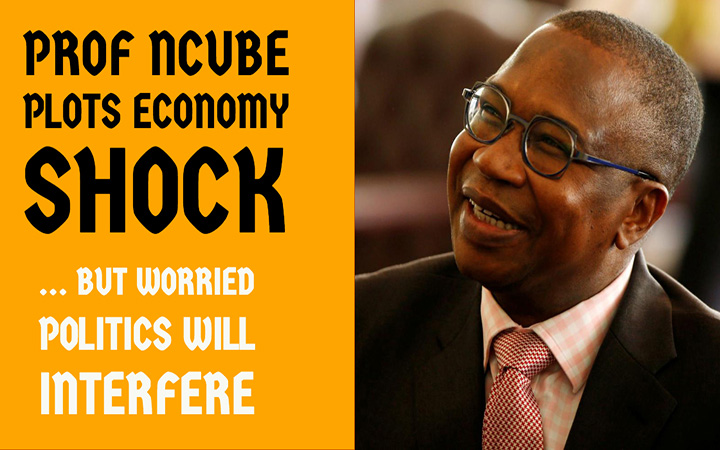 ZIMBABWE’s new Treasury chief Mthuli Ncube wants to bite the proverbial bullet and shock-start the country’s ailing economy but is concerned that lack of political will might hamper his efforts.

Prof Ncube was thrust into the hot seat by President Emmerson Mnangagwa after what seemed to be a two week campaign period for the job that is literally a poisoned chalice.

He was initially bold enough to announce he would scrap the surrogate currency known as bond notes but seems to have cooled down on the idea as reality set in.

“My preference is a fiscal shock, but there is a what you call the political collar, or the politics of policy making, which then slows you down.

“My preference would be more of a big bang approach because every day counts in terms of cost,” said Ncube, according to a Reuters report.

Previous finance ministers have come unstuck as the Zanu PF administration resorts to all manner of political manoeuvres that often undermine the policy thrust they would have envisaged on taking up the job.

Prof Ncube has been warned not to be too overly optimistic with Mnangagwa despite positive signals from the Zanu PF leader.

Along with Mnangagwa and other State officials, Ncube is addressing investors eyeing Zimbabwe but unsure if the recent power shift will guarantee their money after years of policy inconsistency under former President Robert Mugabe’s regime.

Mugabe was removed by the army last November after nearly four decades in power.

The military coup thrust Mnangagwa to the top before a controversial election that seems to have been accepted across the globe despite howls of disapproval from the opposition.

Lack of foreign investment, fiscal deficits and acute shortages of hard currencies like the U.S. dollar are some of the economic problems Zimbabwe – once known as Africa’s breadbasket – is enduring.

The new government’s focus is on getting the economy back on track and requires paying off the $2 billion in arrears to international financial institutions such as the World Bank, African Development Bank (ADB), European Investment Bank (EIB).

The country must also pay the $4 billion it owes the Paris Club of sovereign nations as well as rid the country of its international pariah tag.

John Mangudya, who is both governor of the Reserve Bank of Zimbabwe and chairman of the government’s arrears clearance committee, said the strategy is to clear the debts to the World Bank and ADB first, before approaching the Paris Club.

“We are looking at many options,

“One year from now, our wish and our hope and prayer is that we would have cleared our arrears,” Mangudya – who reports claim might lose his job – said.

Going to the International Monetary Fund would be futile until the arrears are cleared, however.

In the meantime, Mangudya would like to engage in a six-month IMF staff monitoring programme through June 2019 as part of the nation’s re-engagement with the global economy.

The British government, seen as a key ally of the Harare regime, has indicated it would want to help Mnangagwa in this regard.

Mangudya gave an economic growth forecast of between 4.5 percent and 6 percent for 2018.

The return of a Zimbabwean currency is not a priority, however if Mnangagwa has his way. Zimbabwe uses a mixture of other nation’s currencies to conduct daily economic functions, which can be problematic if there are shortages.

Mangudya indicated it might be up to five years before reintroducing a local currency again in Zimbabwe, which suffered from hyperinflation as the economy collapsed.

“Currency reform is a process. The economic fundamentals are not good and ready for us to have our own currency,” he said, adding: “There is a danger of re-introducing a currency before the fundamentals are met.”