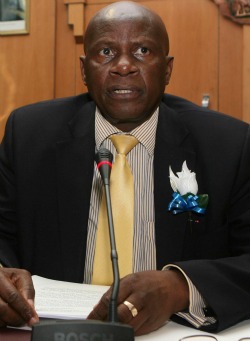 FINANCE minister Patrick Chinamasa has tempered expectations of immediate financial assistance to the country’s private sector by the International Finance Corporation (IFC), the World Bank’s private sector lending arm which is making its first visit to the country since 2001.
An IFC delegation arrived in the country on Wednesday evening for a series of meetings with government, business leaders and the bankers association, as the country seeks long-term, inexpensive funding for its undercapitalised firms.
Failure to access concessional funding has resulted in local companies struggling to retool, becoming uncompetitive on the global market.
“This is a long process; there is nothing that is going to happen overnight,” Chinamasa told journalists.
“It’s a small step towards full engagement and naturally we would not want to raise any unnecessary expectations. Don’t think anything will happen tomorrow, this year or next year.
“This is just a small step towards eventually the IFC starting to engage and support our private sector.”
Visiting IFC director Cheik Oumar Seydi said the institution will explore opportunities in finance, infrastructure and agribusiness during its three-day visit and urged Zimbabwe to clear its arrears with multilateral lenders which he said would send a signal that the country was ready to reengage with the international community.
Zimbabwe owes $9 billion to the International Monetary Fund, World Bank, African Development Bank and the Paris Club, a group of Western creditors.
The country has, since 2009, re-engaged the Bretton Woods institutions after nearly a decade of frosty ties, during which Zimbabwe’s economy shrunk by as much as 40 percent according to official data.
The World Bank’s country manager Camille Nuamah said discussions on Zimbabwe arrears clearance were progressing.
“We are in discussions on the arrears clearance and we are making reasonably good progress, so we hope that this also factors into the future of IFC here in Zimbabwe,” she said.Advertisement