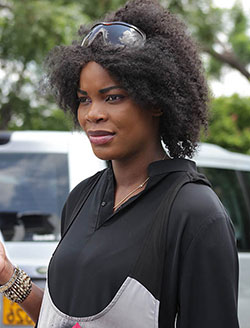 MODEL and financial advisor Emily Katanga Kachote was crowned Miss World Zimbabwe at a glamourous event held at Mermaids Pool in Shamva over the weekend.
The 25-year-old succeeded at the second time of trying, beating Ann-Grace Mutambu, 19, who was named First Princess while Chengetai Kanonhuwa, 18, was second princess.
For coming out tops, all three were awarded cars and other prizes which the organisers promised to deliver in the next few days.
Kachote, who beat 14 rival contestants for the coveted title, said she was confident going into the finals.
“I came here believing. There was no point coming with the belief that someone else was going to take the crown.
“I knew I would be the queen, even before I was in camp,” she said.
Lessons learnt from her failed bid in 2012 came in handy.
“I went home (after 2012 finals) and I asked myself many questions,” she said.
“If you believe you want something, never apologise for it; just go for it.”
Looking ahead Kachote said: “I entered this pageant because I want to be an idol for the young ones out there.
“At the same time I feel like I have so much to impart to the other youths and young girls.
“I am very passionate about women and girls, developing them and seeing them achieve their goals.”
Organised by Mary Chiwenga, the wife of Zimbabwe Defence Forces commander, the event was attended by cabinet ministers, top government officials and business leaders.Advertisement