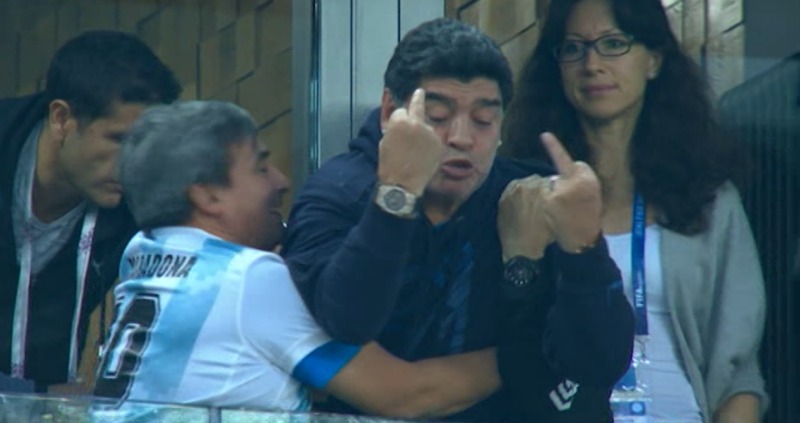 DIEGO MARADONA swore and gave the finger in front of millions of TV viewers as he celebrated Argentina’s crucial late winner against Nigeria.

The 1986 continued a bizarre night for himself by raising the middle finger of BOTH hands – while a colleague in the Saint Petersburg Stadium tried to hold him back.

Maradona had just seen Marcus Rojo sneak the goal that put Argentina in the last 16.

And he could contain his emotions no more.

The infamous Hand of God scorer bent forward to let rip – but this time the controversy was caused by his fingers.

Nigeria were poised to qualify alongside group winners Croatia with a 1-1 draw – until Manchester United defender Rojo bulleted the ball home on 86 minutes.

TV coverage cut to Maradona in the stands just after Rojo netted.

And, depending on your view, the timing could hardly have been better or worse.

Up went both middle fingers from Maradona, seemingly without a care of who saw it.

The dramatic conclusion to Maradona’s, and Argentina’s evening, could scarcely have been more different to the way he begun it – with some silky dance moves alongside a Nigerian fan ahead of kick-off.

The ex-Napoli maestro – looking so relaxed at this stage – swung his hips and linked hands with the supporter.

And the 57-year-old might have felt like upgrading that dance to a tango when Lionel Messi thumped Argentina ahead with a top-corner special on 14 minutes.

Maradona was then seen DOZING at the interval.

But he got a nasty shock soon after the interval when Victor Moses deservedly levelled for Nigeria with a penalty.

And Argentina were far from piling on the pressure when Rojo became their surprise hero four minutes from time.