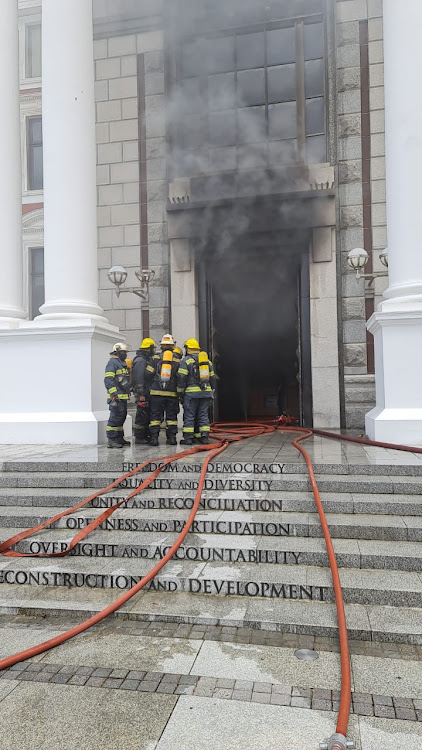 A MAJOR fire in the South African parliament in Cape Town is continuing to burn after more than six hours, with authorities fearing significant damage.

Images broadcast on television showed flames leaping from the roof of one large building, while several others in the parliament precinct including the National Assembly were enveloped in a thick cloud of black smoke.

The fire is believed to have started in one of the older buildings in the precinct, leading to a security cordon near the cathedral where the ashes of the anti-apartheid hero Archbishop Desmond Tutu were buried on Saturday.

“The roof has caught fire and the National Assembly building is also on fire,” said JP Smith, Cape Town’s mayoral committee member for safety and security. No casualties had been reported and the cause of the blaze was not yet known.

Smith said the “fire is not under control and cracks in the walls of the building have been reported”. He added that the fire “is currently on the third floor – initial reports indicate it started in the office space and is spreading toward the gymnasium”.

“The damage will be significant, especially if it’s not contained soon,” he said.

Emergency services feared the fire could spread swiftly through the old rooms, which are decorated with thick carpets and curtains.

A team of 30 firefighters who first arrived at the scene battled the flames for several hours before being forced to retreat and call for reinforcements. About 80 firefighters were later deployed, some using a crane to spray water on the blaze. The fire broke out at about 0300 GMT on Sunday.

The National Assembly building, which has a red and white facade, is where South Africa’s last apartheid president, FW de Klerk, declared the end of the brutal white minority regime in 1990.

The area around the fire in the upmarket neighbourhood was quickly cordoned off. The cordon stretched to a square where flowers were still displayed in front of the nearby St George’s Cathedral, where Tutu’s funeral took place on Saturday.

After a simple mass, with a cheap coffin – according to the famously modest Tutu’s instructions – his ashes were interred in the cathedral on Sunday.

Cape Town is home to South Africa’s seat of parliament, including the National Assembly and the National Council of Provinces, while the government is based in Pretoria.

The Houses of Parliament in Cape Town consist of three sections, including the original and oldest building that was completed in 1884. The newer additions, constructed in the 1920s and 1980s, house the National Assembly.

In April, a blaze on Cape Town’s Table Mountain, which overlooks the city, spread, ravaging part of the University of Cape Town’s library holding a unique collection of African archives.