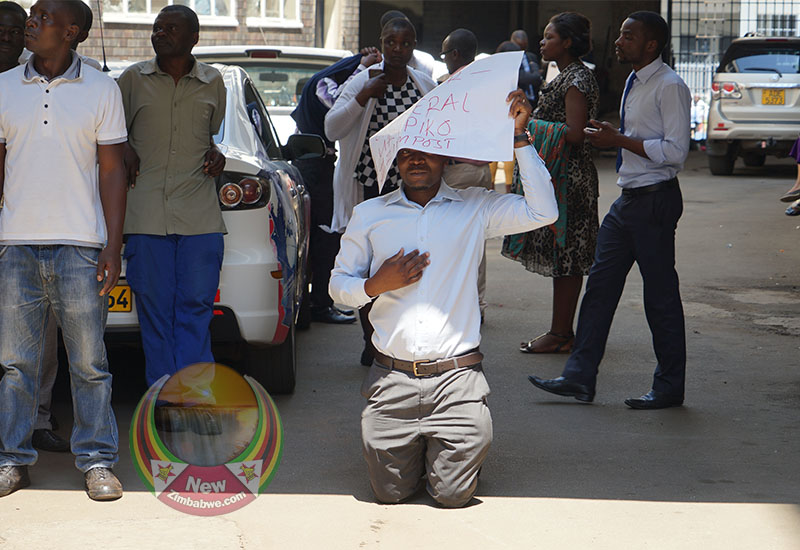 The former workers and the MRP activists gathered, wanted the issue of non-payment of severance packages addressed some five years after they were dismissed from work.

The workers were fired following the infamous July 17, 2015 Supreme Court ruling where a judgement was made in a Zuva Petroleum (Private) Limited case. The Supreme Court ruled then that an employer had a right to terminate a permanent employee’s contract on notice.

Soon after that judgement, thousands of employees lost their jobs as employers took advantage of that Zuva judgement.

At least 50 workers employed by Zimplow were affected by the Supreme Court ruling.

However, the workers are unhappy that five years later, they are yet to receive their severance packages and last week gave the company seven days to respond to their grievances. The company did not respond.

At least 100 demonstrators who were singing and dancing, thronged Zimplow premises where they accused the company of failing to follow the Labour Act when their contracts were terminated in 2015.

Some of the placards they carried read; “We Were Unfairly Dismissed”, “We Have Been Patient For Five Years”, “We Demand Our Loss of Employment Compensation”.

Paul Ngwenya, the chairperson of the affected workers said their dismissal was unprocedural.

“We strongly believe and understand that the procedures of the Labour Act were not followed. Clause 4 and 12C clearly states the conditions of retrenchment,” Paul Ngwenya, the chairperson of the affected workers said.

“I joined Zimplow Holdings in 1984 and was a supervisor when my contract was terminated. I was retrenched when I was on leave in my rural area and got the message through my wife. That was unfair,” he said.

MRP Secretary for Culture Parton Xaba said his party had decided to rally behind the workers because they were being “unfairly” treated.

“As MRP, we are for peace and justice in our lifetime, which is why we responded to their request to come and support the Zimplow former workers who are aggrieved over unpaid dues and bad treatment,” said Xaba.

The company’s management could not be reached for comment.

However, on its website, Zimplow says it is largest manufacturer and distributor of farming implements in sub-Saharan Africa and operates through four divisions, Barzem, Mealie Brand, CT Bolts and Farmec.