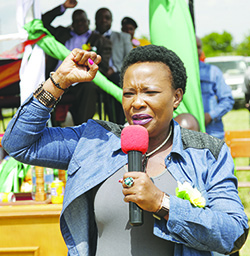 PRESIDENT Emmerson Mnangagwa’s wife, Auxilia, has surrendered her duties as Chirumhanzu-Zibagwe MP to concentrate on her philanthropic role as First Lady.
The news was broken by President Mnangagwa while addressing thousands of Zanu PF followers at Mvuma Stadium during a homecoming rally on Saturday in his former constituency and home province of Midlands.
“The First Lady has asked me to tell you this message. She will now be concentrating on being the mother of the nation, she will be travelling countrywide initiating developmental and empowerment projects. You have not lost because she will continue with all projects she started here,” said Mnangagwa.
“So, it is now up to you to elect another representative during primary elections, who will represent the party in the forthcoming elections,” he added.
Auxilia, a former CIO, became MP through a primary election that was called in 2015, taking over from her husband who had given up the seat upon being appointed Vice President.
Coincidentally, she becomes the second member of the first couple to give up the same seat during the tenure of the current parliament.
While there is no law that forbids a First Lady from occupying any government or legislative post, it had however, become apparent that she might struggle to balance her parliamentary and constituency-based responsibilities with her new role as First Lady.
Since becoming First Lady November last year, Ms Mnangagwa has been on a humanitarian and philanthropic drive, often pictured visiting public hospitals where she has come face-to-face with the rot that dominates the health institutions.
By taking a risk to dump active parliamentary politics, having been a Zanu PF member for decades, Auxilia would be hoping her husband retains his job as President during elections this year.Advertisement