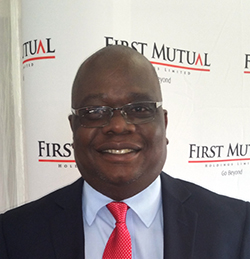 First Mutual Holdings Limited posted an after tax profit of $3,733 million for the five months to May, 72 percent higher than the $2,174 million achieved over the same period last year.
In a brief trading update for the five months at the group’s Annual General Meeting on Thursday, chief executive Douglas Hoto said the group is looking to maintain the position going forward.
According to The Source, in the period, operating profit increased 128 percent to $3,228 million compared to $1,417 million in the prior year.
Net earned premiums marginally increased one percent to $44,882 million from $44,404 million in 2015 same period comparable. Gross premiums written were near flat at $49,063 million in the period compared to $49,262 million in prior the year.
During the period, claims were five percent below same period last year at $27,685 million while commissions were down 17 percent to $2,668 million.
Rental income came in nine percent lower at $2,8 million from $3,085 million.
Fees income for the period was $1,522 million while administration expenses fell four percent to $9,447 million.Advertisement