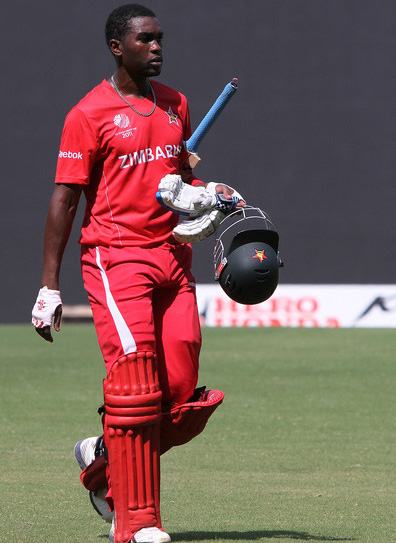 Bangladesh 281 for 7 (Shakib 101, Mushfiqur 65, Panyangara 3-66) beat Zimbabwe 194 (Taylor 54, Shakib 4-41) by 87 runs
ZIMBABWE captain Elton Chigumbura felt that it was dropped catches and early wickets that cost his side the first ODI against Bangladesh.
The visitors dropped three catches, including two from Mushfiqur Rahim, and later lost their way after a fast start to the 282-run chase.
Mushfiqur was first dropped on 16 by Chigumbura himself at cover, the visiting captain failing to hold on to one hit hard at his body.
When on 56, Mushfiqur was caught at deep midwicket by Solomon Mire, but Chigumbura, this time the bowler, had overstepped. A little while later, Brendan Taylor dropped Mushfiqur on 60, fumbling a straightforward chance at point.
The theme of these missed opportunities continued in their chase after Hamilton Masakadza and Sikandar Raza added 47 in eight overs.
Shakib Al Hasan took two quick wickets to stall Zimbabwe’s progress, before another pair of wickets from Mahmudullah added more stutter to their stride.
Once Taylor fell for 54 to a brilliant catch by Mushfiqur, Zimbabwe’s chase was virtually over.
“If I have to be critical I think we dropped too many catches,” Chigumbura said.
“I thought we made a good start but when Mushfiqur and Shakib were batting we didn’t take our chances there. Then they put up a big score. I thought that score was chaseable looking at the situation of the wicket.
“On our batting, we started well but we lost wickets. The number of wickets we lost in the first 20 overs, it was going to be hard for the lower order to try and get 200 runs from there.”
He added: “It is always disappointing to not take the chances you get in the one-day game because one catch can lose the game.
“There were a couple of catches that went down; also we got a wicket off a no-ball which was disappointing. The main problems were losing the wickets.
“I think we have to make sure that we can correct that one in our batting. Especially when you are chasing, the most important thing is to keep wickets in hand.”
Chigumbura did not use his two lead spinners much, giving them just 15 overs in all. John Nyumbu bowled seven of them, giving away 40 runs for one wicket, while Tafadzwa Kamungozi bowled one more for the exact same figures.Advertisement