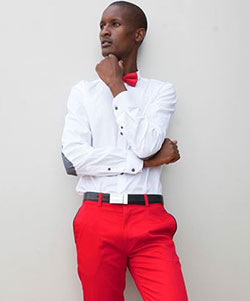 AT face value nothing could be as non-related as his two chosen professions. At a towering height of 1.89 metres (and presumably still growing, he’s only 24!).
Fisher Nyasha Masango, Zimbabwe’s reigning top male model, is both an animal on the catwalk and an aspiring architectural studies student.
Yet they are probably the most related professions in the world when one actually sits down to think about it.
The art of creating a human machine crafted to such perfection ladies have hearts sprinting and their fair lips drooling is something that makes God himself qualify as an architect.
What with the thoroughly particular model hunters looking at even the smallest of details to qualify one as fit to model.
On the other hand, a model must be an architect at the end of it all should they choose an alternative co-career. With a height as soaring as 1.89 metres, one has to design their own house when the doorways for ‘normal’ people cannot accommodate them!
Still, it comes with the territory. But not all is rosy in an industry that is hardly fed in Zimbabwe and certainly being whacked with chinks in the armour courtesy of a topsy-turvy economy which seems relentless in squeezing the nation.
The result is that the chaps are always looking elsewhere to expand their chances of making the big league.
“It’s not an easy ride,” Fisher admits.
“Getting this far in itself was a result of hard work and a lot of energy and dedication. Long hours of trying to impress, to improve the art of modelling and capturing the eyes of talent scouts.”
But not all is gloom when one lands the enviable title of Zimbabwe’s best male mode; the perks are enviable and amazing.

He has had the opportunity to model alongside the stuff that dreams are made of; some of Zimbabwe’s most beautiful women and that is something all normal men will envy him for.
Take Tholakele Dlamini for example; herself, the reigning best Zimbabwean female model.
A fabulous fashion shoot in Zimbabwe’s scenic Victoria Falls was what Fisher got.
He spent countless hours with the earth-angel for a series of takes and retakes, which were obviously sweet hours next to the beauty and Fisher is the first to admit that mixing and mingling with such beauties makes him amongst the luckiest men in Zimbabwe.Advertisement

Many would dream of Tholakele as they gaze at pictures of her stuck onto their bedrooms walls with gum. Fisher got to smell her velvet skin, to gaze into her big brown eyes, to feel the super-human canvas she was gifted with by the gods in lieu of skin.
Yet the challenges keep coming; sadly.
In a country that currently does not even have manufacturers of basic garments like underwear, most Zimbabweans wear imported underwear from China mostly – the inevitable effect is that even for a colossal giant in the modelling industry like him, jobs and modelling gigs are few and far apart.
“I would pray that the manufacturing industry is grown again and people begin to start buying local again. Only then can the jobs start rolling and the modelling industry will start to make sense again,” he yearns.
Yet the light at the end of the tunnel is that resilient names in the fashion industry have kept the candle flickering, if only just.
Jill Day, whose Stitch Magazine carries a significant shoot of Fisher is amongst the mainstays of the fashion industry and, with modelling gigs being rolled out for the second half of the year, people like Fisher can expect to at least get something to do to enhance their passion, albeit for nothing near a living salary.
For cheese on the table, Fisher will have to concentrate on his architecture whilst he continues to rub shoulders with the pretty lasses on the catwalk.