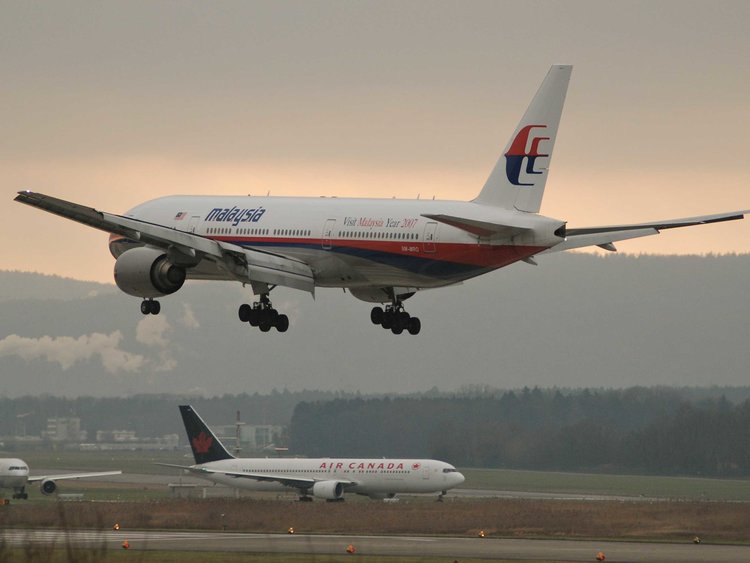 An Indonesian fisherman who claims to know the exact spot where the ill-fated MH370 plane crashed into the Sumatra sea has handed over the co-coordinators to investigators.

Rusli Khusmin, 42, says he and his crew members witnessed the disaster, in which a Beijing-bound Malaysian Airlines flight carrying 239 people disappeared, on the morning of March 8, 2014.

Rusli recorded the co-ordinates of the site where he says the plane entered the water on a GPS device and held up a map to show reporters.

At a news conference today in Subang Jaya, near Kuala Lumpur where MH370 took off, he recalled a seeing a damaged aircraft and thick black smoke.

‘I saw the plane moving from left to right like a broken kite,’ he said. ‘There was no noise, just black smoke as a result of fires before it crashed into the water.’

There was a strong smell of acidic fumes in the air before the plane went down, he added.

Rusli was flown in from Indonesia for the news conference at the Lake View Club in Subang Jaya, where he swore an oath of truth over the Koran.

He has handed over his data containing evidence of the site of impact to CASSA, a Malaysian NGO.

After years of attempts to find the crash site, the Malaysian government halted the investigation, having admitted that they still do not know what happened to the airplane.

There have been countless theories about what happened to the plane, and its disappearance is one of the greatest mysteries in aviation history.

Last month, Professor Martin Kristensen, an engineer at Aarhaus University in Denmark, published a mathematical analysis of the flight data, and claimed the plane went down near Australia’s Christmas Island.
Following a series of advanced mathematical calculations, Prof Kristiansen proposed a new search zone and said that the probability of finding the plane there was ‘above 90 per cent.’

Almost five years after the aircraft vanished on March 8, 2014, investigators have had little luck in finding the wreckage of the plane that vanished with 227 passengers on-board.

No transmissions were received from the aircraft after the first 38 minutes of the flight.

The Australian, Malaysian and Chinese governments called off the search in January 2017, almost three-years after MH370 disappeared.

‘I FOUND IT ON GOOGLE EARTH’

Australian engineer Peter McMahon claimed in mid-March he’d found what appeared to be a plane wreckage on Google Earth, in the MH370 search area.

After spending years combing an online map of the Indian Ocean, the amateur crash investigator claimed to have found a plan wreckage ‘riddled with bullet holes’.

Sitting just off the coast of Round Island, north of Mauritius, in an area of ocean that has not been previously searched, Mr McMahon claimed investigators were refusing to dive in the area because they want to ‘hide’ crucial information.

‘They have made sure that all information received has been hidden from the public, even our government, but why?’ he said.

‘… (They) do not want it found as it’s full of bullet holes, finding it will only open another inquiry.’

Prior to the plane’s disappearance, Captain Zaharie Shah had listed the small island of Diego Garcia – 4700km northwest of Australia – on his flight simulator.

Theorists suggested that Capt Shah may have been practicing landing the plane on the island’s airstrip, which is controlled by Britain but is home to a US naval base.

Suggestions have also been made that the plane may have been stolen by terrorists and hidden in North Pakistan, or even by North Korean dictator Kim Jong un.

In a 2014 poll on the MH370 disappearance, five per cent of American respondents said they believed it had been affected by ‘alien activities’.

In the wake of September 11, new technology was designed allowing planes to be controlled remotely in the event of a hijacking.

British author Norman Davies claims Boeing’s ‘Honeywell Un-interruptible Autopilot on board computer’ – which was featured on MH370 – could have been hacked and the plane flown to a secret location.

‘There are reports that the cargo detailed in the manifest didn’t add up,’ he told The Sunday Times.

In his book Beneath Another Sky: A Global Journey into History, Mr Davis suggested one hacker could have ‘kidnapped’ the plane before another controlled it remotely.

‘The first kidnap was by the Americans, who wanted to stop the plane getting to Beijing and planned to divert it to Diego Garcia [a US naval base in the Indian Ocean], and then somebody hacked it to stop it from getting there,’ he claimed.

DID THE PILOT COMMIT SUICIDE?

Some have claimed that one of the pilots may have deliberately crashed the aircraft in a well-planned suicide.

According to this theory, captain Zaharie Ahmad Shah deliberately chose to plunge the plane into an area of the ocean up to 25,000 feet deep, where it would be almost impossible to find.

There have been suggestions Shah circled an area of the Indian Ocean just moments before the crash.

Former Australian prime minister Tony Abbott is among those to support this theory, saying in the lead up to the third anniversary of the plane’s disappearance he found it ‘plausible’.

‘I have always said the most plausible scenario was murder-suicide and if this guy wanted to create the world’s greatest mystery why wouldn’t he have piloted the thing to the very end and gone further south?’ Mr Abbott said.

Just 12 months after the MH370 disaster a Germanwings flight from Barcelona, Spain to Dusseldorf, Germany, crashed into the French Alps.

It was later revealed the crash was orchestrated by co-pilot Andreas Lubitz, who had previously been deemed unfit to work by a doctor over ‘suicidal tendancies’.

HAVE THEY ALREADY FOUND IT?

Last year a search vessel involved in searching for MH370 disappeared for just under three days after turning off its tracking system, sparking conspiracy theories.

After more than 80 hours undetected, the vessel suddenly reappeared on the radar.

Keen followers of the mystery have suggested that during this time the search boats may have been involved in a cover up, after coming across the wreckage.

According to pilot Chris Goodfellow, a serious possibility is that an emergency – such as a fire – left the pilots unable to land the plane.

Writing on his Google Plus account, Mr Goodfellow claimed that in the event of a fire or other incident, pilots would have attempted to make it to their closest runway – a 13,000-foot strip on the Malaysian island of Pulau Langkawi – but never made it.

‘For me the loss of transponders and communications makes perfect sense if a fire,’ Mr Goodfellow wrote.

‘In the case of fire the first response is to pull all the main fusses and restore circuits one by one until you have isolated the bad one.

‘What I think happened is that they were overcome by smoke and the plane just continued on the heading probably on (autopilot) until either fuel exhaustion or fire destroyed the control surfaces and it crashed.’

DID A MYSTERY PASSENGER HIJACK IT?

The official manifest of MH370 listed 239 people as missing.

But Andre Milne, founder of military technology developer Unicorn Aerospace, says the flight actually had 226 passengers (of which four did not board) and 12 crew – totaling 238 people.

He told The Express that the unidentified passenger may have gained control of the plane and flown it to a secret location.
‘The extra passenger likely acted in conjunction with larger external operational support to take full command and control of the cockpit of MH370,’ Mr Milne claims.

A Malaysia Airlines spokesman said a discrepancy on the ‘load sheet’ hours prior to the plan taking off had occurred, with the actual number onboard 227 people – a dozen less than initially listed.

‘The actual figures can differ from that transmitted on the load sheet due to last minute changes,’ the spokesperson said.