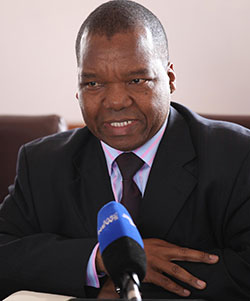 THE financial sector remains safe and sound, despite at least five banks being undercapitalised, central bank governor John Mangudya said on Monday, adding that the authorities are considering a special purpose vehicle to warehouse bad loans.
Presenting oral evidence before a parliamentary committee on finance and economic development, Mangudya said at least five banks are struggling to reach the current minimum capital requirements of $25 million, which is expected to be increased to $100 million by 2020.
Mangudya said the central bank was working on plans to minimise the effect of non-performing loans (NPLs), which are currently around 16 percent of total deposits, on the sector.
“If we get someone with funds, house those NPLs and they will be managed from there to remove that contagion effect from the banks,” he said.
Although Mangudya could not be drawn on details of the plan, he said the concept had already been developed and the bank was working “seriously” on it.
He said the security pledged during the time of loan issue would be put into a special purpose vehicle to ensure that the assets are used to recover money owed.
Mangudya said another option would see the issuance of a special bond to attract foreign funding to deal with the NPLs, to help improve the liquidity situation in the country.
“We would look for someone or some institution with funds, which will then close the NPLs and those funds will be quarantined in a pot where it is supposed to be cash generative and we will also provide liquidity,” Mangudya said.
He added that plans were also underway to establish a national credit reference bureau so that banks had profiles of their borrowers.
The central bank governor, who took office last December, decried what he termed negative perceptions about Zimbabwe, which he said were part of the underlying reasons for the liquidity crunch and sluggish economy.
“The underlying issue is about perception. There is a negative perception within the country which we may call perception risk which is affecting the confidence levels of business including nationals,” he said.
“We need to spruce up the image. We need to speak more positively about the country, ourselves. Those negative perceptions lead to … lack of confidence and what we call country risk events.”Advertisement

Mangudya said the process of re-establishing the central banks’ lender of last resort role would be completed by July 15.