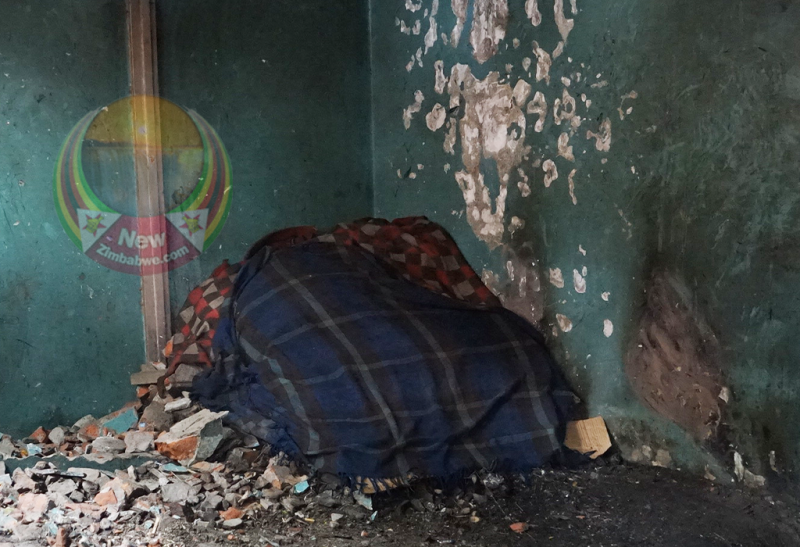 By Darlington Gatsi and Reason Razao

In a public toilet housed in a now-abandoned and dilapidated City of Harare bar, a bunch of homeless young adults, visibly drunk, are squatting just so they could shut their eyes and rest.

The filthy toilet is full of stench human excreta lays at the very end of Matapi flats, a place located at the foot of Mbare.

It now serves as the bedroom for the teenagers and young adults who are too old to share tiny rooms with their parents and siblings.

‘I do not love nhamo’. This is an inscription, on cracked wall; a passionate plea of the 14 families who are currently living at Zororo – a disused community bar in Mbare – to be rescued from the abject agony. 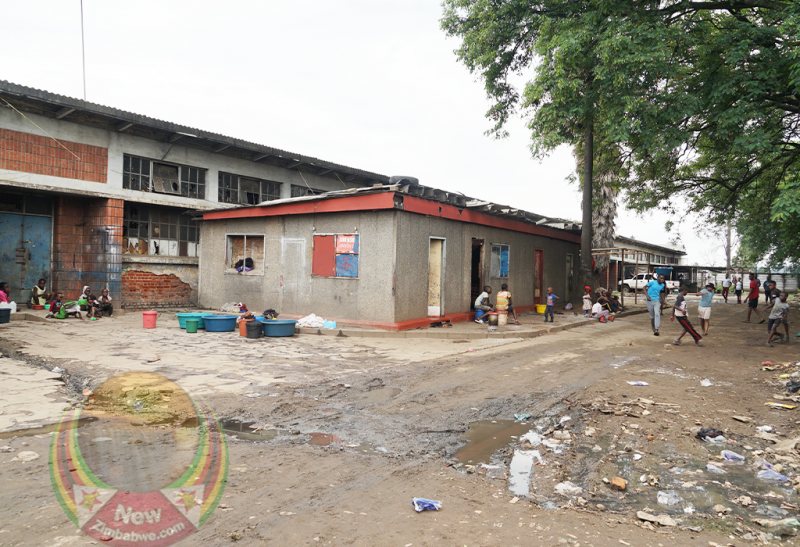 In 2017 Matapi flat was engulfed by fire after an elderly woman left a candle burning, consequently reducing furniture to ashes and leaving 14 families homeless.

Following that incident, the flat was condemned by the local authority and government.

Revesai Muyengwa (45), a vendor at Mbare musika, escaped the inferno with just her life as the possessions she had amassed went up in smoke as the fire blazed.

“It is painful to think of what happened in 2017. I only managed to take my kids out as it was too late to take other belongings as the fire had engulfed the whole flat. It is a miracle that I managed to survive. We were helped by neighbours who gave us clothes,” said Muyengwa.

The government and City of Harare moved the 14 affected families to a disused community bar which was constructed during the colonial era.

Five years on, the 14 families are still homeless, living in the disused bar despite pledges  by the Government and city of Harare to renovate the flats.

A stench permeates through the disused dingy bar as more than 70 people cramp in with cardboard boxes providing compartments to the families.

In these partitions, a whole family is forced to share the one room and, when dressing, they take turns. 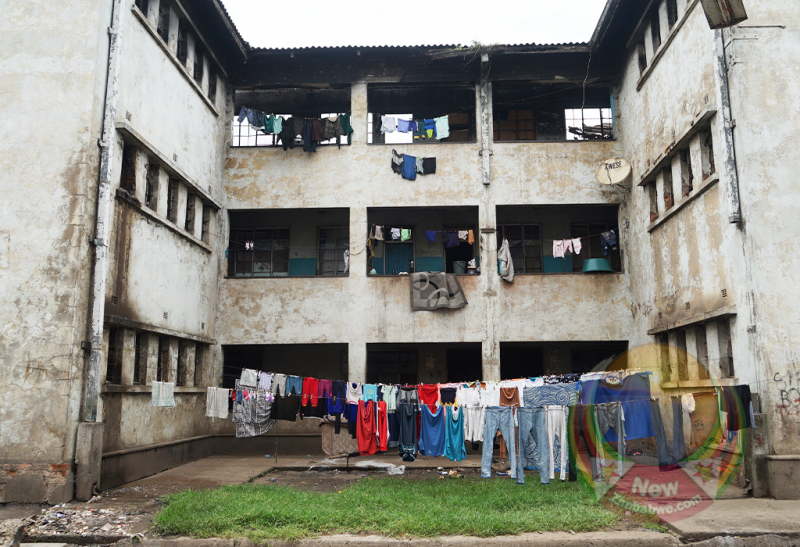 Chipo Jiri 41, a single mother of five, says living conditions at the bar are inhuman as the facility is overcrowded with little progress having been made to alleviate the situation since 2017.

“We were given these mattresses by a church that came to our aid in 2017. Five people share one mattress which is inadequate. Life is hard here as the conditions are not for human beings. Sewage usually bursts and the council takes a long time before responding,” said Jiri.

Because of the squalid living conditions, her elder children have left with the 18-year-old girl now into prostitution while her eldest son, 21 year old, has given up to drugs.

The rooms which house the individual families are shared without privacy or discretion with a broken sewer system sheltering maggots.

In these ramshackle rooms, there is no electricity, no safe source of water and many rely on water from open pits close to their compound.

The living conditions are exacerbated by rain which pours into the old bar through holes on the makeshift windows and roofing.

Social amenities remain a dream to them. 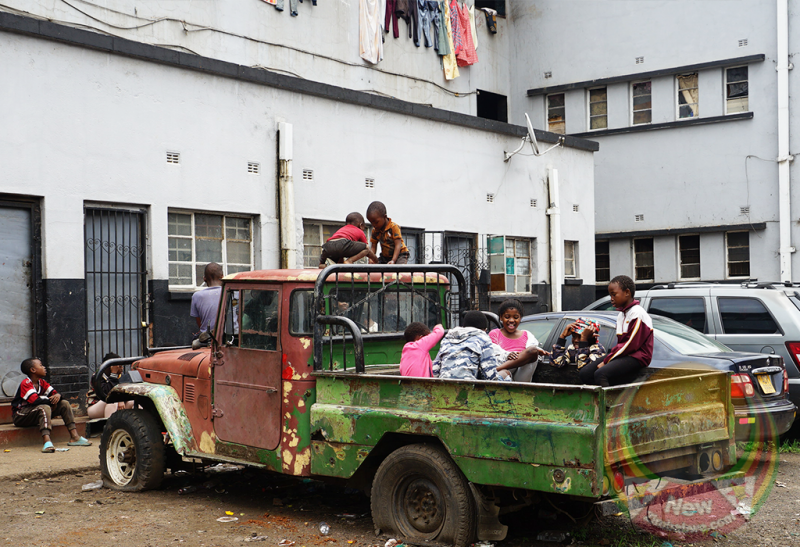 So dire are the conditions at Zororo bar that all the residing families share one toilet that is also frequented by the public.

The youths who used to live in a flat that was razed by fire in 2017, have now firmly established their residence in the disused toilet which has now been turned into a drug haven.

Following promises by government and council to restore the flats, nothing has been done, forcing the 14 families to live in life threatening conditions.

In the toilet, the visibly lice-infested blankets cover a body that barely shows sign of life, upon enquiring, a strained female voice mumbles inaudible words which seemed to suggest annoyance as the reporters had invaded her space.

Chipo Jiri who escorted the NewZimbabwe.com crew to see the place where her son sleeps narrated how her offspring whom she used to stay within their flat is now one of the residents in the crammed toilet.

“We are encountering many challenges here. Thieves and young people smoking drugs are proving to be challenges. My older son hurts me a lot. He was psychologically affected by the fire and he has resorted to taking drugs and mutoriro.

“He had bright future prospects but now that has gone in smoke, he is now  an addict,” said teary Jiri as she narrated her ordeal.

In October this year, clerk of parliament Kennedy Chokuda wrote to the 14 families. In a letter gleaned by NewZimbabwe.com he acknowledged a petition they drafted to the national assembly.

This is  the first official communication from authorities since the families were moved to the disused  bar, signalling a ray of hope for their cries to be heard.

Harare mayor Jacob Mafume, speaking to NewZimbabwe.com said the City Council will look at other alternative options for the residents.

“We will look at whether the model of Matapi flats still works. If it is not working we will have to find a viable alternative solution whereby they can take their families.

“We do understand that their desire to remain in Mbare is premised on the desire to be close to their sources of livelihoods. We will try to find a solution that is in keeping with their desires,” said Jacob Mafume.

For Chipo Jiri , the fragmentation of her once united family to drugs and prostitution, any offer for her to move from Zororo bar, she will accept.

With tears rolling down her cheeks she narrates, “The situation is tough here. We are asking the authorities to heed our call, even if it means giving us land so that we can erect shacks,” she said.