FROM time to time a few countries carry out what is in effect economic suicide.

Four things destroy wealth in society — conflict, ideology, corruption and bad economic policy. Examples in recent history are many but notable ones would include Cuba, the Soviet Union and its European eastern bloc, pre-reform China, Lebanon, Zimbabwe, Syria and, at this very moment, Venezuela.

What should not have to happen often does as states abuse of their monopolistic hold on power — all the more common in a dictatorship than in a democracy where the descent can be arrested. Partly due to institutional pushback, partly due to factionalism in the ANC ruling party, SA’s descent was stopped in December. The damage inflicted by the Zanu-PF dominated state has been far more severe in neighbouring Zimbabwe. Politically conspired wanton destruction of wealth has impoverished the vast majority of Zimbabwe’s citizens.

This is the tragedy left by the Mugabe administration — the squandered resources and vast potential the country once boasted. Although the de facto military coup d’état in November 2017 potentially heralds a new beginning for the Southern African country, the path to economic recovery requires an understanding of the current macroeconomic landscape — both the opportunities the country holds and the challenges that need to be overcome.

Underwriting Zimbabwe’s long-term slide has been bad policy that appealed only to populists, not to capital. The so-called Fast Track Land Reform Programme (FTLRP) in the early 2000s undermined private property rights, destroyed productivity in the agricultural sector, forced the removal of capable farmers and resulted in a severe threat to food security.

On a real basis, the economy contracted at an average of 7.3% a year over the 2000-2008 period. In US dollar terms, the economy almost halved from US$10.1bn in 2000 to just under $6bn in 2008. GDP per capita fell from more than $920 in 1998 to less than $500 a decade later as a result. Alongside Malawi, Zimbabwe became the poorest country in Southern Africa on a per capita basis. Some estimated — possibly exaggerated — unemployment at 90%. 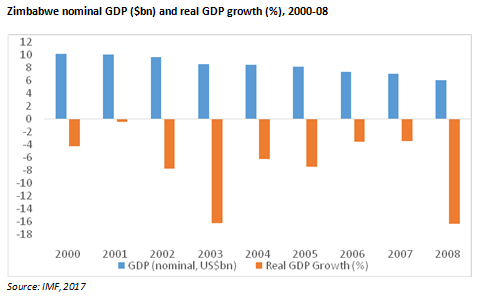 One of Zimbabwe’s more infamous policies was the central bank’s approach of printing money which previously led to hyperinflation. The economy was, however, effectively dollarised in 2009 when the local Zimbabwean dollar currency was indefinitely suspended and the government adopted a multi-currency regime. The dollarisation of the economy has been successful in bringing inflation under control. A similar approach to stabilise a free falling currency is now being proposed for Venezuela.

In recent years GDP growth has remained negligible due to the government’s poor economic policies and lack of fiscal space as well as little-to-no budgetary support from the international community. Above all, political risk and confidence has prevented the flow of capital into Zimbabwe’s economy.

While foreign direct investment (FDI) flows to Zimbabwe have improved since the early 2000s, net inflows amounted to only $0.3bn in 2016 — not nearly enough to address the country’s investment and financing needs. In comparison, neighbouring Mozambique received FDI inflows averaging $5.1bn a year over the 2012-2015 period, and another $3.1bn in 2016.

Zimbabwe’s primary revenue earners are commodity exports dominated by agricultural and mining resources. Tobacco accounted for almost 33% of total exports in 2016, while ores and concentrates by-products, diamonds, gold, and precious metals amounted to 47% of total export revenues in 2016. The uptick in global commodity prices will to an extent underpin Zimbabwe’s GDP growth prospects going forward. But the real challenge is industry. 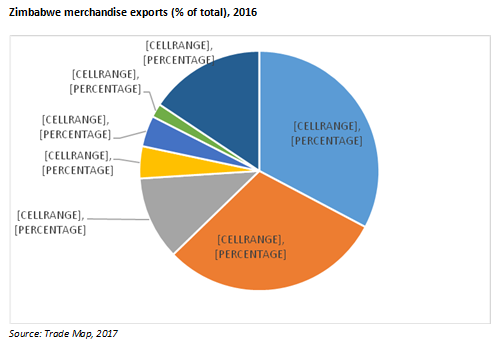 The de-industrialisation of Zimbabwe’s economy, which has accelerated over the past few years, presents a real challenge. According to the African Economic Outlook (AEO), 4,610 companies closed over the 2001-2014 period, with manufacturing as a share of GDP falling from 15.5% in 2009 to 11.0% in 2014. Furthermore, manufacturing capacity utilisation levels are under pressure, measured at 34% in 2015. The infrastructure is there, albeit very run down.

What policy measures need to be carried out in the near term that can result in a revitalisation of the Zimbabwean economy? I propose four structural reform initiatives:

• The first is debt stabilization. Zimbabwe needs a new relationship with the International Monetary Fund (IMF). A new package of assistance will be a significant boost to restoring both domestic business confidence and external investor confidence. The IMF last had a Zimbabwean staff-monitored programme (SMP) in 2015, and a new programme is a much-need first step to stabilising the economy and laying the foundation for recovery.

Zimbabwe’s high levels of outstanding debt and the serviceability of it is very problematic. Patrick Chinamasa, recently appointed (again) as minister of finance and economic development 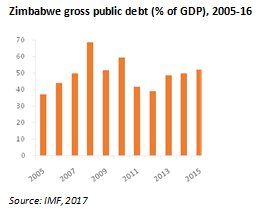 stated in September 2017 that the government would be unable to repay its $1.8bn in arrears to the African Development Bank (AfDB) and the World Bank. The state is also liable for another $5bn owed to bilateral donors not to mention a sizeable amount to China which has been financing infrastructure builds in the country. This debt requires restructuring but this is not possible without IMF support.

• The second overdue reform is that of state-owned enterprises (SOEs). To revitalise Zimbabwe’s infrastructure and economy, there is an urgent need to get Zimbabwe’s state-owned firms back into shape. A synonym for “structural reform” is sensible economic policy. There are about 100 SOEs in Zimbabwe, most of which have been poorly managed and are in precarious financial situations. A proposed reform package is likely to be presented to the cabinet in the coming weeks that will consider which SOEs to privatise and over what timeframe. Expect a fire-sale of state-owned assets in the short term. The speed at which the state will move on this will be a clear indicator as to its commitment to reform.

• The third reform is fixing the indigenisation law in the mining sector. The act that came into force in 2008 requires that all business must be at least 51% owned by Zimbabweans and has served only to damage investor confidence. President Emmerson Mnangagwa has acknowledged this and the law is said to be amended shortly.

• Fourthly, the land issue requires urgent reform and the restoration of confidence in land tenure. The “land reform” policy from 2000 onwards merely served to destroy the productivity of the agricultural sector. Mnangagwa is now seeking to lure expulsed farmers promising 99-year bankable leases back to Zimbabwe’s farming sector.

Zimbabwe’s most valuable export in recent times has been its human capital. Arguably the most educated on the continent, Zimbabweans have departed the country en masse over the past two decades. It is estimated that Zimbabwe’s diaspora now amounts to approximately 3-million, mostly residing in Johannesburg and London. Way beyond any extractive resources, the best lead indicator of a country’s developmental prospects is its ability to create, retain, and attract talent. To underwrite all policy reforms must be a concerted effort by Zimbabwe to attract its talented people to return to the country.

• Davies is MD of emerging markets and Africa at Deloitte and Spangenberg is senior economist, Africa services group, at Deloitte.