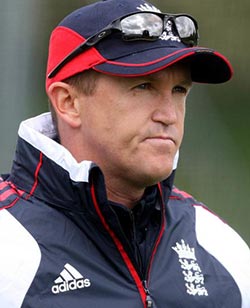 ANDY Flower has declined to commit himself to a future as England Test coach beyond the already unsuccessful Ashes tour.
England lost the urn in Perth on Tuesday when Australia opened up an unassailable 3-0 lead with a third successive comprehensive victory over the tourists.
Flower’s own job, as team director with specific responsibility for the Test team, has therefore come under scrutiny – along with the playing futures of several long-established regulars in Alastair Cook’s team.
Asked whether he believes he can still take England forward, Flower spoke of “judgements” which must be made by him and his employers, and cast his mind forward only as far as the final two Tests of this series.
England arrived in Australia hoping to win the Ashes for a fourth successive time, but instead they have lost them in just 14 days of cricket and must now try to ensure they do not suffer a second 5-0 whitewash in their last three tours down under.
In between, of course, Flower and then captain Andrew Strauss famously oversaw a long overdue series victory here – and also beat England’s oldest rivals twice on home soil, in 2009 and then again just last summer.
Yet when assurances were sought about his future at a press conference in Perth, in the aftermath of the latest defeat, Flower said: “I’ve got that judgement to make, and the England (and Wales) Cricket Board will have that judgement to make as well.”
His ECB staff contract, amended a year ago to split the roles of Test and limited-overs coach between him and Ashley Giles, has no fixed term.
There has, however, been a clamour for clarity about his continued involvement – former Test opener Geoff Boycott among those speaking out within hours of England’s third Test hammering.
Flower added: “I don’t plan that far ahead, personally.
“Obviously, my role means I have to plan ahead for the team’s sake – but personally I don’t like looking too far ahead.
“Frankly, there are still two Test matches to play in the series and I want all my focus to be on those two Test matches.
“I think that’s the right thing to do for the England cricket side.”
The 12 days of Christmas, and week preceding, may be a watershed time not just for Flower but a clutch of senior players – wicketkeeper Matt Prior and off-spinner Graeme Swann perhaps foremost – who have fallen well short of their own high standards on this tour.Advertisement

Flower is not about to write anyone off yet, but does hint time is not necessarily on the side of England’s thirty-somethings.
And Flower is prepared to take his share of the blame for England’s apparent under-performance after their 3-0 home victory only four months ago.
“Absolutely, it’s my responsibility,” he said.
“So I’m quite comfortable taking that on.
“I think without a doubt I have to look at how we prepared and the decisions we made – certainly that I’ve made – so, of course, we will reflect on those things.”