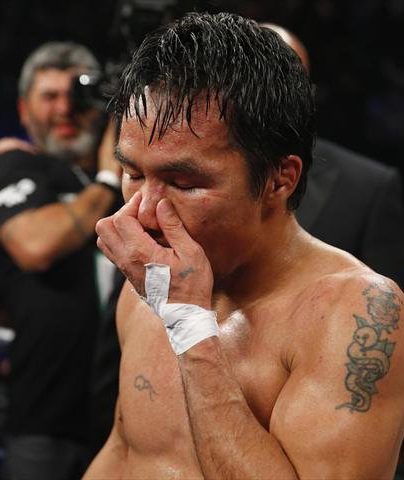 FLOYD Mayweather won ‘the fight of the century’ via decision over Manny Pacquiao in an engrossing battle in Las Vegas.
The ringside judges ruled it 118-110 and two scores of 116-112 in favour of the unbeaten and now unified welterweight champion.
While cynics expected Mayweather to sit back and use his superior reach to pick off Pacquiao throughout the contest, the American started the fight pro-active and steadfast, maintaining his position in the middle of the ring.
Pacquiao struggled to find his range and took some good shots as he dropped all three of the initial rounds, but lit up the MGM Grand with an excellent fourth, including a left hand which visibly shook the favourite:
The Filipino star did enough to make the scorecards competitive in the middle rounds, landing further good shots to Floyd’s temple and busting up his lip, but by the 10th round he began to run out of ideas.
Mayweather, having fully figured out Pacquiao’s offense, made certain of victory with an excellent cat-and-mouse strategy in the last few rounds.

WHAT THEY SAID
Floyd Mayweather: “All 47 fights before this played a major key, I want to win all fights badly. Pacquiao is a true champion and we were both at our best. I knew I would get hit. I played it smart.”
Manny Pacquiao: “It was a good fight. I thought I won. He didn’t really do anything. It wasn’t about the size. I’ve fought bigger than him. Now I’ll take a vacation and see what is next.”

ROUND BY ROUND
Round one: The expected cautious start from both, though Mayweather holds fort in the middle of the ring and lands a few solid rights. Pacquiao finally corners him in the final 10 seconds but Floyd immediately ties him up. 10-9 Mayweather.
Round two: Mayweather continues to use his reach and speed to have the upper hand. Couple of lands by Pacquiao but a few more for the unbeaten ‘Money’. 20-18 Mayweather.Advertisement

Round three: Mayweather is reeling off the right with excellent timing and hits another good one in the dying seconds. He’s spoiling when Pacquiao does get a decent chance but it’s working. 30-27 Mayweather.
Round four: Pacquiao finally starts landing some good shots including a strong flurry that Mayweather cannot defend as well as he had been, followed by a strong left to the face when Floyd tried to brush it all off. Manny needed that. 39-37 Mayweather.
Round five: Not a great deal from Mayweather but he’s neutered Pacquiao again after Manny’s hot round four. Back to a three-round advantage. 49-46 Mayweather.
Round six: Superb round from Pacquiao – no superb shot on par with the left in the fourth but more attacking flurries. Mayweather again trying to shrug them off but they’re landing. 58-56 Mayweather.
Round seven: Most even and one of the most open rounds of the fight, but while Pacquiao continues to set the tempo after two good rounds in the previous three, Mayweather’s counter-punching is back on song. Manny’s aggression stood out here. 67-66 Mayweather.
Round eight: After starting off the round hot, Pacquiao ends it a little despondent after being picked off more than once on the counter-punch by that overhand right. So accurate. Important round for Mayweather. 77-75 Mayweather.
Round nine: Floyd trying to stick to his flow and having some success but Pacquiao’s not growing frustrated as others have at this stage and just nicked that round. 86-85 Mayweather.
Round 10: Floyd nicks round 10 with excellent defensive work. The most ‘typical Floyd’ round of the fight so far. Pacquiao visibly annoyed at the end of that one. 96-94 Mayweather.
Round 11: We’re entering Mayweather teritory here. Pacquiao doesn’t seem to have much else to offer. Floyd has him sussed. He could win the rounds at the end here that ensure even the most crowd-swayed judge goes for Floyd. 106-103 Mayweather.
Round 12: Very comfortable from Mayweather to finish – he knows Pacquiao has run out of ideas and pretty much walks his opponent through a cat-and-mouse final stanza to ensure victory. 116-112 Mayweather.