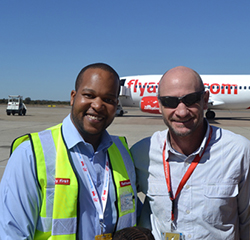 LOW-COST airline Fly Africa says its inaugural flight between Victoria Falls and Johannesburg will now start next week after resolving outstanding regulatory issues.
The airline was scheduled to start flights on Wednesday this week, but failed to take off after the Civil Aviation Authority of Zimbabwe (CAAZ) demanded that its pilots be licenced locally.
“We were told that since our flights are registered in Zimbabwe then our pilots should be licenced locally as well and so we didn’t take off. Because our aircraft is registered in Zimbabwe and our pilots licenced in South Africa, there are regulations to be followed so they can be licenced locally,” the airline’s country manager, Mati Karase told The Source.
“(CAAZ) told us our pilots should write competency tests first. The issue of safety is of concern in the industry and we hope to resume normal flights next week after outstanding issues are addressed to the satisfaction of CAAZ.”
CAAZ general manager, David Chaota said it was procedural to have pilots licensed locally before they are allowed to operate.
“It is the procedure everywhere in the world as a form of standardisation,” he said.
Fly Africa plans to fly three times a week on Sundays, Wednesday and Fridays and plans to itroduce more local routes.
The airline is a partnership between the Karase family’s Fresh Air and Mike Bond of the now defunct One Time of South Africa.
The airline has a 120–seater Boeing 737-5000 and is charging $60 for a one way ticket, excluding taxes and baggage which are charged separately.Advertisement