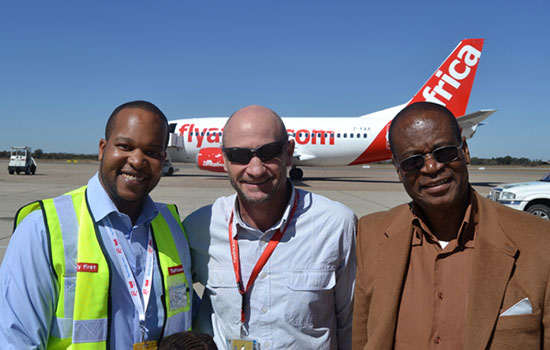 MAURITIUS based Flyafrica Limited, which owns 49 percent of low cost airline Flyafrcia Zimbabwe, says its local partners acted unilaterally and illegally when they surrendered the Airline operator Certificate (AOC) to aviation authorities this week.
Flyafrica Zimbabwe is a partnership between the Karase family’s Fresh Air and Flyafrica Limited.
The company said in a statement on Wednesday the move was in retaliation for fraud and theft charges involving $140,000 which had been filed against an unnamed member of the Karase family on Tuesday.
The Civil Aviation Authority of Zimbabwe (CAAZ) on Wednesday grounded the airline’s aircraft following the surrender of its AOC.
“This conflict is deeply troubling to us, however we cannot allow theft of such a large-scale to go unresponded,” said chief executive Adrian Hamilton-Manns, adding that the move by the Karase family was ‘designed to tarnish the company’s brand.’
Hamilton-Manns said Flyafrica limited had suspended its local partner for breach of directorial and fiduciary duties and that it plans to lay more charges against the family.
The airline started operating in August last year, servicing the Victoria Falls-Johannesburg route.Advertisement