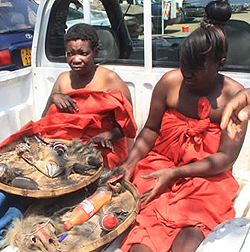 WHEN superstitious beliefs go unchallenged, they sometimes take very bizarre forms. Sometimes they are regarded as “science” and promoted openly and confidently as if they are based on facts and evidence.
They could be vested with sacredness and shielded from critical examination and scrutiny. Superstitions are often invoked by politicians to demonstrate power, legitimacy and authority.
Embracing superstitions should call into question a people’s mental state and cause others to question their claim to rationality. Making superstitious claims should reinforce the idea that some human beings are backward, trapped in pre-modern age and still down the ladder of human civilisation, in an unenlightened state.
Irrational beliefs expressed publicly by public leaders embarrass a nation and a generation. This is the case in Swaziland.
Some months ago, the aviation authorities in Swaziland issued a statement which surprised many people around the globe. They warned that high-flying witches would be penalised. High-flying witches? Be penalised?
Swaziland Corporate Affairs Director Sabelo Dlamini actually said, “A witch on a broomstick should not fly above the [150-metre] limit.” Wow!
Of course, on hearing this directive one may think it was something made up by someone bent on discrediting Africa’s last absolute monarchy. Far from it, it was a policy statement from the aviation authorities in Swaziland to regulate ‘witch-flights’ in this 21st century.
You may have wondered if there are still human beings who take seriously the notion of a ‘flying witch’. Yes, there are! The people in Swaziland do actually believe this as reflected in the country’s new law.
It is not only in Swaziland that the notion of a ‘flying witch’ is taken seriously. In fact, across Africa, people believe strongly that witches fly, in various forms, shapes and sizes most often at night.
Some more educated Africans believe witches carry out their nocturnal flights, not physically or in ways that could be detected or regulated by aviation authorities, but spiritually. It is only when things go wrong in the course of the supposedly ‘spiritual flight’ and the witches “crash land” that they are exposed physically.
Witch doctors or anyone with magical powers is believed to be able to spiritually track a flying witch.
Across Southern Africa, there is a belief that witches fly at night in winnowing baskets. Recently, two alleged witches were arrested by the police in Zimbabwe after they ‘crash-landed’ outside a house in Harare. They were found with a ‘live owl, two winnowing baskets, and an assortment of witchcraft-related paraphernalia’. The two women have been charged in court for ‘engaging in practices commonly associated with witchcraft’.Advertisement

The idea of a flying witch is nonsense to educated humanity, but is taken as absolute truth by millions of Africans. Witch flight makes so much sense to the people in Zimbabwe that the authorities could take these poor women to court and not be laughed out of office. The idea of flying witches is of such significance that the government of Swaziland has now decided to regulate it.
Have the authorities ever caught a witch flying on a broomstick in the country’s air space? Some flying witches were reportedly caught in Zimbabwe, but they were pictured sitting on the ground. Why can’t any of Africa’s ‘flying witches’ be caught or photographed flying? Why are ‘magic planes’ always pictured lying on the ground? Why can’t they be captured flying even if it is few centimetres above the ground? These are critical questions Africans have yet to ask.
We must break the spell of ignorance that hangs over Africa. Fearful ignorant minds wasting precious resources fighting imaginary witches in winnowing baskets must be replaced with educated, honest people administering the forward progress of an emerging continent with real needs.
Are the authorities in Swaziland and Zimbabwe listening to the future calling?