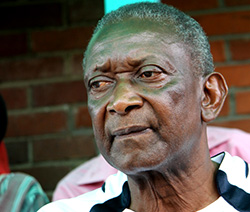 ZIMBABWE football legend Freddy Mkwesha united people for the last time at his rural home in Goromonzi as he used to do during his hey days.
He was laid to rest at his home in Goromonzi on Thursday.
Ex-Dynamos and Caps United players, Eddie Muchongwe, the Chidzambwa brothers – Sunday and Misheck, Moses Chunga, Kalisto Pasuwa, Gift Muzadzi, Norman Mapeza and Brenna Msiska, among others, paid their last respects to the man who is widely regarded to as one of the finest players to emerge from Zimbabwe.
ZIFA CEO Jonathan Mashingaidze, PSL chair, Twine Phiri, former Motor Action chief of protocol Simeon Jamanda, supporters, friends and relatives also attended the burial.
Dynamos board of directors chairman, Bernard Lusengo, said Zimbabwe had been robbed of a football icon adding that the void Freddy left would be difficult to fill.
“We have been robbed of a football icon,” said Lusengo.
“The void he has left will be difficult to fill. He was a fatherly figure at Dynamos, always there to give guidance.
“Dynamos have of late been enjoying peace and tranquility. It was all because of his guidance. He was the first Zimbabwean player to play in Europe when he went to play in Portugal.
“Caps United enticed him to play for them while he was in Portugal. May his soul rest in peace.”
In their condolence message, the Sport and Recreation Commission (SRC) said they had learnt with sadness the sudden death of Mukwesha, the country’s first football export to Europe at the age of 25.
“It is with a heavy heart that we have received the sad news of the passing on of our greatest footballers of all time – Freddy Mkwasha. Freddy was Zimbabwe’s first football export to Portugal in 1966 at the age of 25.
“This was testimony of his great football skills and that is a manifestation that sports transcend all barriers. This is so because Zimbabwe was not yet independent then.
“After his playing days, Freddy became one of the best local coaches and went on to win various trophies and accolades with mainly Caps United,” the commission said.
Mkwesha was a Dynamos founding member in 1963 and was instrumental in the club’s formative years.
He was an adviser to the club’s board of directors at the time of his death.
Mkwesha also served at Caps United, where he recorded successes in cup competitions as a coach.Advertisement