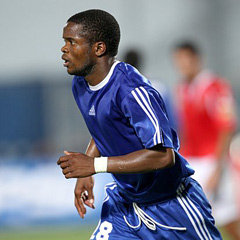 Justice Majabvi in action for Dynamos
Spread This News

FOOTBALL legends, Dickson Choto, Justice Majabvi and David Sengu have been dragged to court for failing to settle rentals for a building leased to a company known as Four Prosper Investments (Private) Limited in a deal they pledged suretyship.

ZIMRE Property Investments is demanding payment of $32 000 including interest and cost of suit against the trio and the company.

Sengu captained CAPS United to memorable back-to-back titles in 2004/5 while Majabvi is best remembered for his scntilating performances for Dynamos between 2006-9.

Choto turned out for Legia Warsaw.

The three are said to have bound themselves as surety in the lease agreement between the company and ZIMRE.

Cited as respondents are Four Prosper Investments (the company) and the trio cited as second, third and fourth respondents.

The complainant also wants cancellation of the lease agreement.

Read the summons now before the High court.

“The plaintiff’s claim against the defendants is an order confirming the cancellation of the lease agreement between the plaintiff and Four Prosper Investments, an order ejecting the company and all those claiming occupation of the property through it from the premises known as Suite 308 Third floor, Old Shell House, 57 Nelson Mandela Avenue, within 48 hours of service of the order.”

ZIMRE also wants the defendants and all those claiming occupation to remove structures that they have placed on the property.

Another demand is that the defendants should pay $32 000 per month as holding over damages plus all operating costs from July 2021 being the first full month after the cancellation of the lease, to the day they vacate the building.

The material terms and conditions governing the lease agreement was that the initial period of lease would be from January 2021 to December 2021.

The agreed rent for the period 1st January 2021 to March 2021, was $32 000 excluding value added tax (VAT) and the plaintiff would give notice of its intention to review rent.

The first defendant would be obliged to pay all rentals and operating costs monthly and in advance without the need for demand and without any deduction whatsoever on the first day of each month.

The company took occupation of the premises and as at May 1 2021, the monthly rentals were $32 000 excluding VAT.

Four Prosper was indebted to the plaintiff in the amount of $243 314 made up of rental arrears and operating costs and interest including VAT.

It is alleged that on May 18 the company acknowledged its indebtedness in writing pledging to settle the arrears.

Despite acknowledging the debt in, it however failed to pay or correct the breach prompting court proceedings.

Choto and Majabvi agreed to act as surety and co-principal debtors for all the first defendants ‘debt and signed deeds of Suretyship renouncing their benefits of all legal exceptions.

The lease was cancelled on June 10, 2021, and the plaintiff notified the defendant that it would be proceeding to claim for eviction, rental arrears, operating costs, interest thereon, legal fees and collection commission in terms of the Lease Agreement.