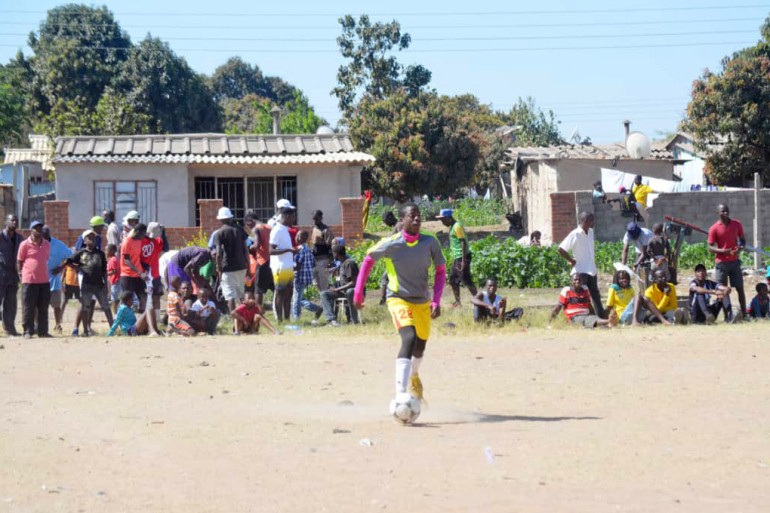 WITH organised football suspended in Zimbabwe due to the coronavirus pandemic, the country’s long-suffering footballers have once again turned to “money games” to make ends meet.

On average, a club player earns 5,000 Zimbabwean dollars a month ($50 officially but $16 on the black market). The salary is less in the lower divisions.

With no international matches, these footballers have thus resorted to unsanctioned matches – deemed illegal by their own clubs – which are also prohibited under the government’s lockdown rules.

Normally, crowds would play a huge role in these cross-township football rivalries in Zimbabwe’s capital, Harare. Up to 5,000 spectators jostling for a glimpse of the end-to-end action from the pitch side could be seen at a high-profile game.

However, since the coronavirus outbreak, big crowds would attract unwanted attention from the army and police officers.

As a result, these matches now start as early as 8am local time (06:00 GMT) to avoid high spectator numbers.

“Money games” have been played in Zimbabwe for years where, during the off-season, some of the country’s best top-flight league players appear in a desperate attempt to supplement their meagre income.

The prize-money, in most cases, comes from local football enthusiasts who have the cash to spare.

The “sponsors”, on both sides, put forward $200 each with the sum shared by the winning squad. In the case of a draw, sides share $100 each, with the sponsors keeping the rest.

But now, the matches are witnessing a surge in high-profile players who are left out of pocket with sanctioned football currently suspended and most top-flight clubs failing to pay players during the forced break.

These players put themselves at risk of career-threatening injuries given the substandard pitches they play these matches on.

“Our team went quiet on us since the lockdown started in March 2020 and we haven’t been paid a cent,” Malvern Chiketa, who plays for second-tier club Eiffel Flats, told Al Jazeera.

“I play these money games to earn some money and also to keep fit for next season.”

An Eiffel Flats official, who asked to remain anonymous, said the club was “broke and struggling” and unable to pay salaries.

Midfielder Tendai Huwa, whose contract with top-flight club Triangle FC expired in December 2019 and was not renewed due to the uncertainty, featured in one of the games.

“I’m stone broke,” Huwa told Al Jazeera. “I was unable to buy my family any groceries for Christmas so I have to play here. If we don’t play football, we don’t get paid.”

Zimbabwe has reported more than 27,000 cases of the coronavirus with 713 deaths, according to data collected by Johns Hopkins University.

A nationwide curfew, ban on gatherings and closure of non-essential businesses for a month was announced earlier this month.

As a result, police and security officials have increasingly been cracking down on these matches.

On Christmas Eve, baton-wielding police officials and soldiers forcibly dispersed players and crowds at a dusty football pitch in Glen Norah, a populous township in Harare, ahead of a series of matches between old rivals from the suburbs of Glen Norah and Highfields.

The show of force has not resulted in the games being stopped, mostly due to the financial burden the payers are under.

Before the coronavirus pandemic, most of Zimbabwe’s football clubs were already financially stretched.

League officials said the country could not afford the bio-secure technology required for football to be played thus leading to last season being abandoned with hopes of a resumption in sporting activities dashed by the January 5 lockdown that is in place for another month.

With the restrictions unlikely to be fully relaxed anytime soon, the 2021 season, whenever it kicks off, is likely to see empty stands, a difficult situation because nearly all the clubs in the county depend on gate revenue for survival.

The cheapest ticket costs as little as $1 and the biggest teams – Dynamos, Highlanders and CAPS United – can attract some 25,000 fans.

‘At least it’s something’

On the dusty fields, for as little as a $400 “winner-takes-all” prize money, players send tackles flying and many try and survive the test for a share of the much-needed cash.

Matches have continued to be played during the lockdown. Crowds gather without social distancing and masks.

“I’m aspiring to become a FIFA-licensed player agent so I put my money into these games because I want these gifted young footballers to be under my wings when I finally qualify,” a sponsor, who is a well-known second-hand clothing trader, told Al Jazeera on condition of anonymity.

“I give them these games as incentive and to keep them close to me as possible.”

Normally, a player would hope to earn at least $10 if his side wins. In some cases, the sponsors pay more to the big-name players without their teammates knowing.

The spectators also get involved, placing bets on their favourite local teams and players.

“I have been putting my money on (name withheld). He scores for fun,” Glen Norah, a resident of Munya Chikerema, who travelled more than 12 kilometres (7.5 miles) to Mbare, told Al Jazeera.

Vernon Mhlanga, a 55-year-old Mbare resident and a die-hard fan of the Dynamos – Zimbabwe’s biggest and most successful club – said he was “depressed” to miss top-flight action this year and now takes solace from the “money games”.

“This is the first time in 30 years that a whole year will pass without me going to the stadium to watch the Dynamos,” Mhlanga told Al Jazeera.

“Dynamos means the world to me. This great club has its roots here in Mbare so it means a lot to this community. The lack of league football this year depresses me a lot. That’s why I come to watch these games because at least I get to watch some of the youngsters from the big clubs. It’s not the real thing, but at least it’s something.”

Fans, players and officials all agree these are uncertain times with more of the same to follow. But Zimbabwe’s Premier Soccer League (PSL) is optimistic about the return of top-flight football this year.

“Whatever it takes, we will begin the new season in March, even if it means getting a vaccine,” said Kennedy Ndebele, PSL chief executive.

“We have to get permission from the ministry of health and the ministry of sports. We are currently putting together a proposal. The likeliest scenario is that we will resume in March, with matches being played behind closed doors.”

There is also the question of revenue and how the clubs will make ends meet without the supporters in the stands.

“We are looking at measures to make sure all clubs remain afloat,” added Ndebele.